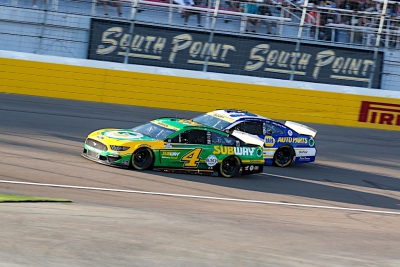 ●  After getting up to second place on the opening lap, the No. 4 Subway Delivery Ford Mustang dropped to 10th by lap seven.

●  Harvick steadily rallied, clawing his way back to sixth by lap 13.

●  “Need some rear grip, early center (of the corner) both ends (of the track),” said Harvick on lap 25 while running sixth.

●  Pitted for four tires and fuel on lap 28 during competition caution. Gained one spot in the pits to restart in fifth place.

●  Some contact with Matt DiBenedetto on lap 35 caused some slight right-front fender damage to the No. 4 Subway Delivery Ford.

●  Harvick maintained fifth place until lap 55 when William Byron got by, sending Harvick to sixth.

●  Dropped to seventh on lap 59 and then to eighth on lap 67. Held on to eighth through the end of the stage.

●  Pitted for four tires and fuel with a track bar adjustment and tire pressure changes at the end of the stage.

●  “Feel like I need it to turn mid-center, late-center better,” said Harvick while running eighth on lap 92.

●  Harvick took advantage of caution and pitted for four tires and fuel on lap 93, with the pit crew working on that right-front fender.

●  “Sideways all the sudden in traffic,” said Harvick on lap 122 after dropping back to 13th.

●  Rallied to eighth at the end of the stage as Harvick was able to stay out on fuel mileage while others ahead of him were forced to pit.

●  The No. 4 Subway Delivery Ford Mustang had dropped to eighth by lap 177 as both Brad Keselowski and Kurt Busch got by.

●  Made scheduled, green flag pit stop on lap 214 for four tires and fuel.

●  Busch nipped Harvick for eighth on the final lap and Harvick crossed the stripe in ninth.

●  Harvick’s 13 top-10s at Las Vegas are the most among active NASCAR Cup Series drivers.

●  This was Harvick’s fourth straight top-10. He finished fifth Sept. 4 at Darlington (S.C.) Raceway, eighth Sept. 11 at Richmond (Va.) Raceway, and second in the series’ prior race at Bristol (Tenn.) Motor Speedway.

●  This was Harvick’s 10th straight top-15, a streak that began July 11 with an 11th-place finish at Atlanta Motor Speedway.

●  Denny Hamlin won the South Point 400 to score his 46th career NASCAR Cup Series victory, his second of the season and his first at Las Vegas. His margin over second-place Chase Elliott was .442 of a second.

“That was about what we had tonight. We got the right-front fender nicked up a little bit, but that didn’t really change the car, so we lucked out on that. We battle and gained ground on it. That is what we wanted to do – not give it all away today. We were able to gain ground and we’ll go from there.”

Playoff Standings (with two races to go before Round of 8):

The next event on the NASCAR Cup Series schedule is the YellaWood 500 on Sunday, Oct. 3 at Talladega (Ala.) Superspeedway. It is the fifth race of the 10-race playoffs and the second race in the Round of 12. It starts at 2 p.m. EDT with live coverage provided by NBC and SiriusXM NASCAR Radio.