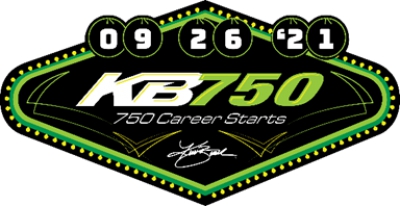 Busch’s versatile driving talent has helped him to score poles and race victories on every type of track on which the NCS competes (superspeedway, intermediate, short-track and road course). The 43-year-old driver has also won at least one race in 18 of his 22 years of NCS competition, including at least one win in the last eight consecutive seasons.

Kurt Busch on NASCAR Cup Series Start No. 750: “It is hard to imagine, Twenty plus years in the NASCAR Cup Series. To have been able to compete at this level with some of the best teams in the sport and against the level of competition is such a privilege. It is like aging, the years seem to go faster, it seems like 700 starts was just a few weeks ago! I appreciate the friendships and partnerships over the years. I feel like I have some race wins still out in front of me and I am looking forward to whatever the next milestone will be that I have a privilege to accomplish.”