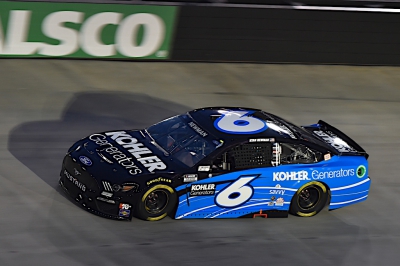 Ryan Newman’s night at Bristol Motor Speedway ended prematurely after the Kohler Generators Ford sustained damage from a crash early in stage two, relegating him to a 38th-place finish.

In his 39th Cup start at Bristol, Newman rolled 24th off the grid for the 500-lap race that was broken up by stages of 125, 125 and 250 laps. Newman finished the opening segment where he started, and fired off around the same spot for the second stage.

Then, at lap 169, Newman shot up the track causing severe right-side damage. The team worked feverishly in the pits and sent him back out for the ensuing restart, but was ultimately black-flagged for not meeting minimum speed within the first three laps of the green flag run.

The No. 6 team is back in action next weekend at Las Vegas Motor Speedway, where race coverage is set for 7 p.m. ET on NBCSN, and can also be heard on PRN and SiriusXM Channel 90.