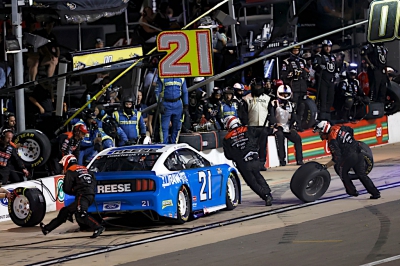 After a mediocre start to the Bass Pro Shops NRA Night Race at Bristol Motor Speedway, Matt DiBenedetto and the No. 21 Reese/Draw-Tite team turned their fortunes around late in the 500-lap race and came away with their eighth top-10 finish of 2021.

DiBenedetto lined up 19th for the start of Saturday night’s race and moved up three spots before the Competition Caution flag flew at Lap 42.

He continued to run near the back of the top 20 through the first two 125-lap Stages, finishing 19th in both segments, his forward progress hindered by some issues on pit road that at one point necessitated a second trip down pit road on one stop.

Then, between Jonathan Hassler’s pit strategy and DiBenedetto’s driving, the Reese/Draw-Tite Ford Mustang began to move forward. DiBenedetto broke into the top 15 by Lap 368 and cracked the top 10 for the first time with 129 laps to go.

He moved to as high as sixth place with 104 laps remaining, dropped out of the top 10 then worked his way forward in the closing laps to cross the finish line in 10th place.

“We were able to recover from some early struggles on pit road where we were kind of shooting ourselves in the foot,” DiBenedetto said. “We fought back with a real blue-collar effort.”

DiBenedetto said his Reese/Draw-Tite Mustang wasn’t a winning car, but it was fast enough to deliver a stout performance. “It was a good effort by the team. I’ll take a top-10 after our early struggles.