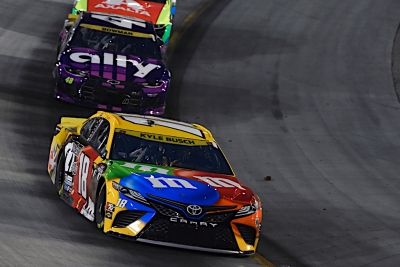 ● The M&M’S driver started ninth and moved up to eighth by the lap-40 competition yellow. He told crew chief Ben Beshore his racecar was tight from the center through the exit of the corner.

● Busch moved up to seventh by lap 100 and brought home his M&M’S Toyota in that spot to end the first stage, earning valuable points in his quest to move to the next round of the playoffs.

● The two-time Cup Series champion came to pit road on lap 130, where Beshore used air pressure and wedge adjustments in an attempt to loosen up Busch’s tight racecar.

● Busch moved up to sixth by lap 170, and the No. 18 team decided to stay out under the next caution. He restarted fourth with 18 laps to go in Stage 2.

● However, Busch could not hold off several cars behind him on fresh tires. He brought home a 10th-place finish in Stage 2.

● The M&M’S driver came to pit road following the stage on lap 253. Beshore again made significant adjustments to the No. 18 Toyota in hopes of helping the racecar’s tight condition and lack of overall grip.

● The Las Vegas native pitted under caution and off sequence from many of the leaders on lap 391 and then restarted 11th.

● Busch made quick work of the drivers ahead of him on older tires, as he moved all the way up to fourth by lap 411.

● The M&M’s driver fell to sixth by lap 450 but looked like he would end the race with a 22-point cushion above the playoff cutoff.

● Busch’s fortunes took a turn for the worse on lap 455 when his right-front tire went down, necessitating a green-flag pit stop.

● When Busch exited the pits, he was two laps down in 25th and only one point above the top-12 cutline. Not to be outdone, Busch went back to work and gained several spots. Eventually he was able to add enough cushion to make it into the Round of 12.

“Just lack of speed really with our M&M’S Camry. We just weren’t very good at being able to make up time on the leaders there. Was only going to be about fifth there. We fought hard there all day long and had a flat there at the end and got way behind. I guess we made it (into the Round of 12), so that’s all that matters. We’ll go to Vegas with a clean slate and get back after it again.”