A Bittersweet Second for Harvick at Bristol 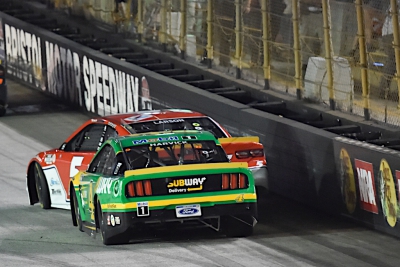 ●  By the time the competition caution flag waved on lap 40, Harvick had his No. 4 Subway Delivery Ford Mustang comfortably in fifth.

●  “Need a little rear grip all the way through the corner,” said Harvick during the competition caution.

●  Pitted for four tires and fuel on lap 44 during the caution. Crew chief Rodney Childers elected not to make any changes as history told him the car would tighten up as the race wore on.

●  Harvick settled into sixth place for the remainder of the stage.

●  “Loose on entry and exit,” said Harvick at the end of the stage, “but I slide through the middle of the corner. I can’t roll it like I need to.”

●  Pitted at the conclusion of the stage for four tires and fuel with a track bar adjustment.

●  “Still need to roll through the center and still need rear grip,” said Harvick while running fifth during a caution on lap 167.

●  Pitted for four tires and fuel with tire pressure adjustments during the caution period on lap 172.

●  Lined up third for lap-182 restart, but Ryan Blaney took over third on lap 189, sending Harvick to fourth.

●  Harvick took third place back from Blaney on lap 215 and then set his sights on second-place Denny Hamlin.

●  “It feels pretty good right there,” said Harvick during a caution period on lap 219.

●  Pitted for four tires and fuel while under caution on lap 226, but eight other cars stayed out.

●  Lined up ninth for lap-233 restart and climbed to sixth by the end of the stage.

●  “My car was loose,” said Harvick after the stage concluded.

●  Since Harvick pitted on lap 226, Childers opted to keep Harvick on the racetrack following the stage.

●  The No. 4 Subway Delivery Ford Mustang paced the field for 10 laps before Blaney took the top spot.

●  After staying in Blaney’s tire tracks, Harvick re-took the lead on lap 308.

●  By lap 332, Kyle Larson was challenging Harvick for the lead, and he finally got the spot from Harvick on lap 337.

●  During a caution on lap 364, Harvick said, “Struggling in the middle – tight both corners. Can’t put the throttle down like I need to.”

●  Pitted for four tires and fuel with a right-rear wedge adjustment on lap 365.

●  Lined up third for lap-371 restart and held that positon until lap 400 when second-place Denny Hamlin hit the wall, bringing out the caution and elevating Harvick to second.

●  Harvick got by Larson for second on lap 434 while Elliott led.

●  Harvick and Elliott battled for the lead amid lapped traffic and, on lap 465, Harvick emerged the leader after slight contact with Elliott, who ended up with a punctured a left-front tire and had to pit.

●  Harvick led until lap 497 when Larson overtook him for the lead. Prior to that, Harvick was slowed by the now lapped car of Elliott, who despite being three laps down, was running competitive lap times with the leaders because he had fresh tires.

●  Larson held the top spot for the final four laps and held off Harvick, crossing the stripe .227 of a second ahead of the No. 4 Subway Delivery Ford Mustang.

●  Harvick’s second-place finish tied his best result so far this season. He finished second May 2 at Kansas Speedway in Kansas City.

●  This was Harvick’s second straight top-two at Bristol. He won the series’ prior race on the concrete last August.

●  Harvick earned his eighth top-five and 19th top-10 of the season, and his series-leading 14th top-five and 21st top-10 in 41 career NASCAR Cup Series starts at Bristol.

●  This was Harvick’s third straight top-10. He finished fifth Sept. 4 at Darlington (S.C.) Raceway and eighth in the series’ prior race at Richmond (Va.) Raceway.

●  This was Harvick’s ninth straight top-15, a streak that began July 11 with an 11th-place finish at Atlanta Motor Speedway.

●  Harvick has now advanced out of the Round of 16 in all eight editions of the current playoff format. Coming into this season, he had advanced all the way to the Round of 8 since 2014, and five times he’s competed in the Championship 4, winning the NASCAR Cup Series title in 2014.

●  In winning the Bass Pro Shops Night Race, Larson scored his 12th career NASCAR Cup Series victory, his series-leading sixth of the season and his first at Bristol.

“I told him (Elliott) it was kind of a chicken-$#!& move that he did there at the end. We’re racing for the frickin’ win at Bristol. We’re three-wide in the middle and he throws a temper tantrum, like I was just trying to get the lead and race him hard. Then he pulls up in front of me and just sits there until I lose the whole lead, so I just hate it for our Subway Ford Mustang team to be able to lose a race like that. I watched him let the 24 (teammate William Byron) go by and then anytime you run into him it’s a problem. They can boo all they want. I don’t care. I lost so much there and then when I got behind the car I kept getting tight off the corner and I couldn’t run my line. I’m ready to rip somebody’s freaking head off.”

Playoff Standings (to begin Round of 12):

Failed to Advance to Round of 12:

The next event on the NASCAR Cup Series schedule is the South Point 400 on Sunday, Sept. 26 at Las Vegas Motor Speedway. It is the fourth race of the 10-race playoffs and the first race in the Round of 12. It starts at 7 p.m. EDT with live coverage provided by NBCSN and SiriusXM NASCAR Radio.