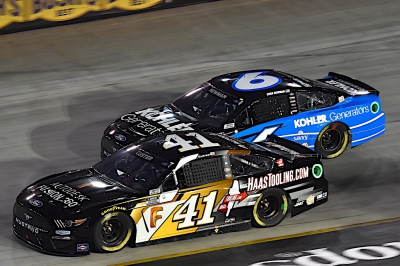 ● The Autodesk Fusion 360/HaasTooling.com Ford driver picked up one position during the 40-lap run to the competition caution. He said his racecar had “really good” drive off the corner. He was concerned that it was “too tight” at the very start, predicting that conditions were only going to get tighter through the course of the race. He pitted for four tires, fuel and adjustments and restarted 24th when the race went back to green on lap 48.

● Custer dropped a position to 25th before the end of the stage, saying his racecar was still too tight on the restart, then saying it was still on the tight side, that “it won’t finish the corner.” He pitted during the break for four tires, fuel, an air-pressure adjustment and a spring rubber added to the right rear.

● The Autodesk Fusion 360/HaasTooling.com Ford was holding down 25th place when, on lap 167, Custer was unable to avoid a multicar accident in front of him in turn two. He incurred front-end damage and came down pit road twice during the caution to make repairs. He restarted 35th on lap 181.

● Another multicar accident brought out the caution flag on lap 220, by which time Custer had moved up to 32nd place. The race then went red for seven minutes and 53 seconds for track cleanup. Custer pitted when the race went back to yellow for fuel and to remove a spring rubber from the left rear. He restarted 30th on lap 232.

● In the 18-lap run to the stage’s end, Custer said the most recent changes “unhooked the back too much on the restart, but then it got tighter.” He asked for more help with the car’s ability to turn over the long run, which he felt would help his forward drive. He pitted for four tires, fuel and an air-pressure adjustment during the break.

● The Autodesk Fusion 360/HaasTooling.com Ford driver picked up a position when a spinning car in turn four brought out the caution flag on lap 364. He reported his racecar restarted better, overall, “but then got tight after about 10 laps.” He pitted for four tires, fuel and air-pressure adjustments and restarted 29th on lap 370.

● The caution flag flew once again for a single-car incident in turn three. Custer, still running 29th, said the most recent changes did not improve the car’s ability to turn. He pitted for four tires, fuel and a track-bar adjustment in the left rear, and restarted 29th on lap 396.

● Custer reported he was pleased with that restart, but it was a brief run to the next caution flag for a single-car incident in turn one on lap 400. He stayed on track and restarted 29th on lap 407.

● The Ladera Ranch, California, native picked up one position the rest of the way and took the checkered flag 28th.

●  Kyle Larson won the Bass Pro Shops Night Race to score his 12th career NASCAR Cup Series victory, his sixth of the season and his first at Bristol. His margin over second-place Kevin Harvick was .227 of a second.

“Man, I never thought we’d have this much bad luck in a season, but here we are. I can say I do feel good about getting the car solid at the end of the race tonight, but that getting caught up in that wreck in the second stage just set us back too far. It’s on to the next one.”