DiBenedetto Looking for Redemption at Bristol 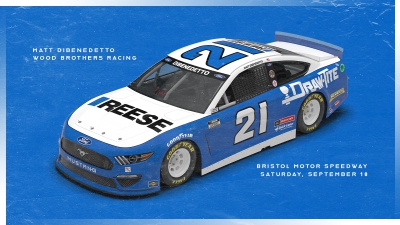 Matt DiBenedetto and the No. 21 Reese/Draw-Tite Ford team are headed into the 61st annual Bass Pro Shops Night Race at Bristol Motor Speedway hoping to steal some of the thunder from the Cup Series Playoff contenders.

Throughout his career, DiBenedetto, who is 18th in the points standings, has had some of his best runs on the high-banked concrete half-mile oval in the Tennessee foothills.

His best run there came in 2019, before he took over the iconic Wood Brothers Ford. He finished a close second after leading 93 laps late in the race.

The Wood Brothers also have had success at Bristol, with a win in 2001 along with nine other top-10 finishes and a total of 26 top-10s. Their most recent top-10 came in 2019 when the now-retired Paul Menard finished sixth.

“I’m hoping for some redemption after coming so close there before,” DiBenedetto said, adding that he’s proud to be representing his sponsors for Saturday night’s 500-lapper under the lights. “I’m excited for Reese/Draw-Tite, this is one of my favorite races of the year.”

There will be no practice or qualifying prior to the start of Saturday night’s race. DiBenedetto will line up his No. 21 Mustang in 19th place for the drop of the green flag.

The starting order was set based on results from Richmond Raceway, with the 16 Playoff drivers starting ahead of all others.