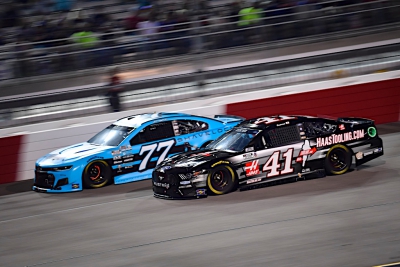 ● The HaasTooling.com Demo Day Ford driver, set to start 21st, had to drop to the rear of the field at the start of the race. But he didn’t stay there long, as he advanced to 26th by the time the competition caution came out on lap 30.

● During that caution, the No. 41 team brought their driver down pit road for four tires, fuel and an air pressure adjustment to combat a tight-handling racecar. Unfortunately, the team was handed a penalty for an uncontrolled tire and had to start at the rear again.

● Custer worked his way up to 28th after just 16 laps and continued to pass cars as the stage continued. He reported that his racecar had trouble turning in the center of the turn.

● The 23-year-old driver held onto his No. 41 HaasTooling.com Demo Day Ford Mustang to finish 27th in the stage.

● During the stage break, Custer came down pit road for four tires, fuel and another round of adjustments. He restarted the second stage 22nd.

● During the opening laps of the second stage, Custer began to lose spots as the long run continued. He came over the radio on lap 110 to tell the team that his car was still tight and lost rear grip on the long runs.

● On lap 133, the No. 41 HaasTooling.com Demo Day team brought their driver to pit road for four tires, fuel and another set of adjustments during green-flag stops. He rejoined the field 29th after his stop.

● Custer’s Ford mustang started to respond better on the long run, and he climbed all the way up to 21st during the caution-free run.

● The HaasTooling.com Demo Day team brought Custer down pit road for another round of green-flag pit stops on lap 181. After four tires, fuel and another set of adjustments, the No. 41 rejoined the field 23rd.

● During the remainder of the caution-free Stage 2, Custer climbed as high at 20th, where he finished the stage.

● The team pitted again during the stage break for four tires, fuel and an air pressure adjustment.

● The HaasTooling.com Demo Day Ford driver reported that his Ford Mustang was starting to become loose before the caution flag waved on lap 251. After the race went back green on lap 254, Custer began to fall back as the Ford Mustang struggled on the short run.

● As the run continued, Custer reported that his Ford Mustang was still not turning in the center of the corners and needed more rear grip.

● On lap 290, the No. 41 HaasTooling.com Demo Day team brought Custer down pit road for four tires, fuel and more air pressure adjustments to try and help the balance of his racecar.

● During the next run, Custer reported that his Ford Mustang was starting to get too free. The No. 41 team brought Custer down pit road for their final stop of the race on lap 353 for four tires, fuel and an adjustment to help tighten handling.

● Unfortunately, the 23-year-old racer was unable to overcome the balance issues on his racecar and had to settle for a 22nd-place finish.

“Today was just a rough day at Richmond. We struggled with the balance of our No. 41 HaasTooling.com Demo Day Ford Mustang throughout the entire race. We’ll take what we learned today and move ahead to Bristol.”