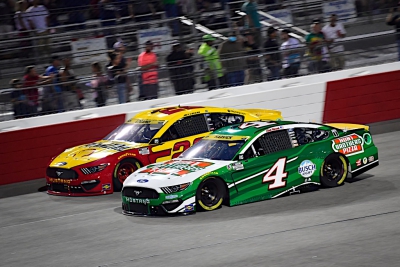 ●  Contact with Ryan Blaney on lap two damaged the right-front corner of the No. 4 Hunt Brothers Pizza Ford Mustang.

●  Harvick settled into sixth place by lap three and held that spot until passing Brad Keselowski for fifth on lap 27.

●  “Tight into the corner, loose off the corner,” said Harvick after the competition caution on lap 30.

●  Pitted for four tires and fuel on lap 31. Lined up fourth for lap-37 restart.

●  “Just plows taking off and loose as soon as you put the throttle down,” said a fifth-place Harvick while under caution on lap 42.

●  Harvick was sixth on lap 50, three laps after the race returned to green.

●  Fell to seventh on lap 70 as a hard-charging Kyle Larson took the position.

●  Dropped to ninth on lap 78 as Ross Chastain and Martin Truex Jr., got by.

●  At the end of the stage, Harvick radioed that his car’s handling condition hadn’t changed.

●  Pitted for four tires and fuel at the end of the stage, with right- and left-rear wedge adjustments.

●  Lost 10th to Kyle Busch on lap 94, but Harvick regained the spot on lap 96 with a pass of his Stewart-Haas Racing teammate Aric Almirola.

●  Made scheduled, green flag pit stop on lap 132 for four tires and fuel with some chassis adjustments. Was 12th after pit stops cycled through.

●  Made scheduled, green flag pit stop on lap 179 for four tires and fuel with a right-rear wedge adjustment.

●  Harvick was eighth after pit stops cycled through.

●  “It needs to hang on with the rear drive,” said Harvick at the end of the stage after finishing 10th.

●  Pitted for four tires and fuel at the end of the stage, but spent extra time on pit road fixing right-side damage from the early-race contact with Blaney.

●  The No. 4 Hunt Brothers Pizza Ford Mustang picked up 10th two laps after the lap-245 restart.

●  Made scheduled, green flag pit stop on lap 293 for four tires and fuel.

●  Harvick climbed to sixth by lap 302 after pit stops cycled through.

●  Dropped to seventh on lap 307 after Chase Elliott got by and then fell to eighth on lap 319 when Bell took the spot.

●  “I’m struggling with the front tires. I just can’t really do much,” said Harvick on lap 334 after Kyle Larson got by to put him in ninth.

●  Was seventh after pit stops cycled through by lap 350.

●  Dropped to eighth on lap 380 after Larson took seventh, but Harvick held the position through to the finish.

●  “It was a handful, that’s for sure. But we made something out of it,” said Harvick on the cool-down lap.

●  Harvick earned his 18th top-10 of the season and his series-leading 27th top-10 in 41 career NASCAR Cup Series starts at Richmond.

●  This was Harvick’s second straight top-10. He finished fifth in the series’ prior race at Darlington (S.C.) Raceway.

●  This was Harvick’s eighth straight top-15, a streak that began July 11 with an 11th-place finish at Atlanta Motor Speedway.

●  Since joining SHR in 2014, Harvick has only finished outside the top-15 once at Richmond, a lone 24th-place finish in the series’ previous visit to the track in April.

●  Martin Truex Jr. won the Federated Auto Parts 400 Salute to First Responders to score his 31st career NASCAR Cup Series victory, his fourth of the season and his third at Richmond. His margin over second-place Denny Hamlin was 1.417 seconds.

●  There were five caution periods for a total of 30 laps.

●  Only nine of the 37 drivers in the Federated Auto Parts 400 Salute to First Responders finished on the lead lap.

The next event on the NASCAR Cup Series schedule is the Bass Pro Shops Night Race on Saturday, Sept. 18 at Bristol (Tenn.) Motor Speedway. It is the third race of the 10-race playoffs and the last race in the Round of 16. It starts at 7:30 p.m. EDT with live coverage provided by NBCSN and SiriusXM NASCAR Radio.