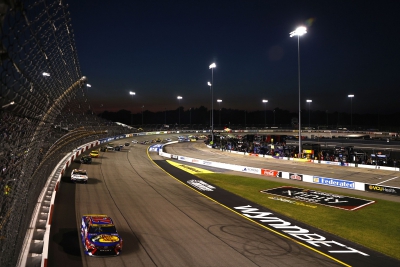 It was a quick penalty from the start of the race for Martin Truex who was moved to the front row due to Kyle Larson going to the rear for an inspection failure. Truex sitting on the inside of Denny Hamlin who was the control car beat Hamlin to the line sending Truex to pit road for a pass-through penalty.

Truex was able to get in and out of pit road all while staying on the lead lap but well behind the field and able to hang out in the rear of the field to the competition caution.

Trouble struck early again for another playoff drivers when on lap 42 a tire went down on the No. 1 machine of Kurt Busch sending him hard into the wall in turn one and two. Kurt would climb from the damaged car ending his night early.

By the time the stage would end hometown Denny Hamlin would take home the stage win over Elliott, Logano, Larson who started at the rear and Blaney.

It didn’t take long once the green flag flew for Elliott to hound Hamlin for the lead taking it away just a lap later leaving Hamlin in the clutches of Penske teammates Logano and Keselowski.

As green flag stops got underway for the second time in stage two disaster struck for Chase Elliott when he bought his No. 9 machine in for service. After overshooting the pit box, the jack then broke under the car as the team hung new tires on the car causing them to have to rip it from under the car and continue the stop.

By the time Elliott got back out on track he would cycle in the 15th spot with race leader Denny Hamlin nipping at the bumper trying to put him a lap down. Elliott would motor away after several laps leaving Hamlin stalled behind him but just as Elliott and Hamlin hit lapped traffic it was Hamlin that was able to pounce and put Elliott a lap down.

Hamlin would make his way around Austin Dillon and William Byron putting both a lap down sticking but the battle wouldn’t be over as inch-by-inch Elliott would pass Austin Dillon then Byron to stay in the free pass position just as Hamlin would take him the stage two win.

Following a quick caution to end the stage and a follow up caution for Wallace getting into the wall Elliott made quick work of getting back into the top-10 after making his way around Almirola with 132 laps remaining.

Meanwhile up-front Joe Gibbs Racing was in full control of the race with Hamlin in the lead, but it would be Martin Truex Jr. who would hound Hamlin for a dozen or so laps finally making his way around Hamlin.

As green flag stops once again got underway and began to cycle through it would be Ross Chastain taking over the lead, however it would last long as Kyle Busch with a head a steam behind him made easy work of Chastain to re-claim the lead.

As the laps wound down and another round of pit stops underway Kyle Busch who was well in command of the race leading 30 plus laps came to pit road only to get hit by a speeding penalty on pit road sending him back for a pass-through allowing teammate Martin Truex Jr. to take over the lead with Denny Hamlin eight seconds behind in second.

With the final laps of the Federated Auto Parts winding down and without a threat from Kyle Busch due to a speeding penalty Martin Truex Jr. went to work on the field but not before Denny Hamlin in second started to make up ground on the leader. However, in the end Hamlin time would run out and Martin Truex Jr. would claim victory over a trio of Joe Gibbs Racing cars of Hamlin and Bell to win with Elliott and Logano rounding out the top-five.

"That was frustrating; I'm not going to lie. But I knew we'd have a good enough car to overcome it. It felt pretty good the first couple laps. Just one of those things; you've got to put it out of your mind and you've got to go race, and we knew there was a lot on the line tonight. Very happy to get to do this and go to Bristol without any worries next week is always fun." Said Truex

"our pit stops were a little slow there and we lost about two or three seconds, maybe four on pit road those two stops, and about a second and a half behind. We were coming, just we got off track with our car right there in the middle stages of the race, but overall Chris and the team made great adjustments there at the end on the FedEx Camry, just needed a couple more laps, that's all." Said Hamlin following his second place finish in Richmond

The series will now move onto another short track under the lights next Saturday night September 18th at 7:30 p.m. ET at Bristol Motor Speedway for the NRA Bass Pro Shop Night race.