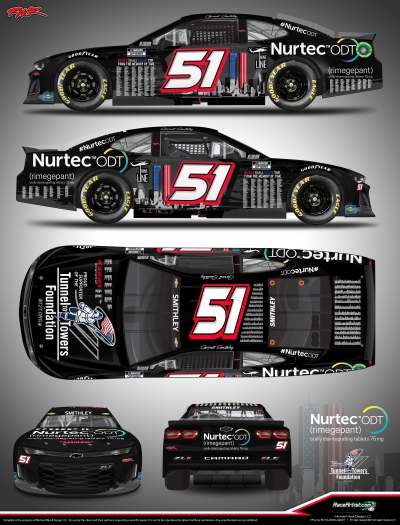 Rick Ware Racing announced today its partnership with Biohaven's Nurtec® ODT (rimegepant) and Nine Line Apparel to honor the victims of 9/11 on the 20th anniversary of the attacks. Garrett Smithley will pilot the No. 51 Nurtec ODT 9/11 tribute car at Richmond Raceway for the Federated Auto Parts 400 Salute to First Responders.

Garrett Smithley, Rick Ware Racing commented, “In memory of the lives lost that fateful day in September, I am honored to drive the 20th Anniversary 9/11 Tribute car for the Federated Auto Parts 400 Salute to First Responders at Richmond Raceway. The Nurtec ODT No. 51 car will have the names of nearly 3,000 victims who senselessly lost their lives on that day. Together, we remember the fallen, the survivors and the first responders who didn’t hesitate to help those in need.”

Nine Line Apparel created a "We Remember" t-shirt in which 100 percent of the proceeds will be donated to Tunnel to Towers, a foundation that is dedicated to honoring the sacrifice of firefighter Stephen Siller, who laid down his life to save others on September 11, 2001. The foundation also honors military and first responders who continue to make the supreme sacrifice of life and limb for our country. Through the sale of the t-shirt over $120,000 so far has been raised for Tunnel to Towers.

Vlad Coric, M.D., CEO of Biohaven said, “We are proud to be a part of the Rick Ware Racing team and work with Nine Line Apparel on such a meaningful opportunity to commemorate the lives lost and families impacted by the 9/11 attacks. Additionally, we are pleased to be part of this effort to help raise funds for the Tunnel to Towers foundation to honor the sacrifice of firefighter Stephen Siller and other heroes like him. We also will continue through our Military Salutes Program with Rick Ware Racing and the drivers of the Nurtec ODT No. 51 car to support active-duty service members, their families and veterans, which also includes support for our first responders.”

"As a veteran owned giveback organization, our brand was built on the foundation of honoring those heroes we've lost in service to our country," said Rich Caponi, Chief Revenue Officer of Nine Line. "We know that Biohaven and Rick Ware Racing share this same passion, which is why we feel privileged to honor the legacy of all who lost their lives 20 years ago - first responder and civilian alike. To those that were lost - know that we truly believe that 'no day shall erase you from the memory of time.'"

The Federated Auto Parts 400 Salute to First Responders will air on NBCSN under the lights at Richmond Raceway on Saturday September 11 at 7:30pm ET. For more information on Rick Ware Racing, visit www.wareracing.com. For information on Nurtec ODT visit www.nurtec.com.