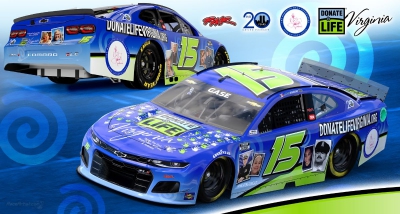 Donate Life Virginia and NASCAR driver Joey Gase will host a Handprints of Honor event paying tribute to first responders ahead of the 20th anniversary of 9/11.  The Donate Life Virginia #15 car will feature painted handprints from Henrico County firefighters and police officers on the car's hood. The car also has the 9/11 20th Anniversary logo and hashtag #NeverForget as we remember those lost on September 11, 2001.

In addition to featuring handprints from heroes, Donate Life Virginia will honor other first responders, veterans and members of the military who were organ, eye and tissue donors or recipients by featuring their pictures on the #15 car.

Gase tragically lost his mother to a sudden brain aneurysm when he was 18 years old. Faced with a difficult decision, he and his family decided to donate his mother's organs. Gase developed a passion for educating others on the need of organ, eye and tissue donation and honoring all of those affected by it. His car regularly features the face of his mother and other donors, making his one of the most unique cars in NASCAR.

The Donate Life Virginia #15 car will race in the Federated Auto Parts 400 Salute to First Responders at Richmond Raceway on Saturday, September 11.