Spire Motorsports Partners with Shavelogic for Salute to American Heroes 400 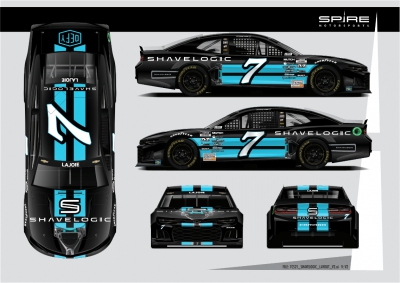 Spire Motorsports announced today that Shavelogic will be the primary sponsor of both the organizations Nos. 7 and 77 Chevrolet Camaro ZL1 1LEs in Saturday’s NASCAR Cup Series’ (NCS) Salute to American Heroes 400 at Richmond Raceway with drivers Corey LaJoie and Justin Haley, respectively.

Shavelogic is the newest, and most advanced entrant into the razor industry. Its product line has quickly evolved from modest production volumes just nine months ago, to a fast-growing category disrupter.

With a team of world-class professionals from industries spanning research and development, to marketing, and manufacturing, Shavelogic has well over 300 years’ worth of combined experience under its belt. After securing over 150 patents to date, the Shavelogic team is on its way to forever changing how men shave.

“For Shavelogic, performance is in our DNA,” said Rob Wilson, CEO of Shavelogic. “I can’t think of a better way to communicate the world class design and functionality of our product, than alongside the best-in-class team of performance-focused minds that make up Spire Motorsports. The team’s attention to detail and drive to be at the top of their sport makes our collaboration all the more impactful.”

Shavelogic believes that in racing, like in shaving, all the pieces of machinery have to work together in perfect harmony to be effective.

“I’ve been looking forward to this weekend since the schedule was released,” commented LaJoie. “Knowing that Richmond was scheduled for the 20th anniversary of the September 11 attacks, this race has been circled on my calendar for a long time.

“Spire Motorsports is also thrilled to welcome Shavelogic to the sport and show the brand and its team the power of the loyal NASCAR fan base. We’ve spent a lot of time together and it’s clear that Shavelogic’s marketing strategies are a perfect fit with our team. I’m proud to represent this exciting new brand and our whole team is eager to get to the track and put on an awesome Saturday night, short-track race. Richmond is one of the most technical tracks on the schedule and the performance package NASCAR has given us will make the cars a lot of fun to drive.”

Meanwhile, Haley made his first start at Richmond on NASCAR’s senior circuit in April but was forced to retire from the event prior to its conclusion due to a mechanical failure. The Winamac, Ind., native has four starts at Richmond in NASCAR Xfinity Series competition where’s he’s logged three top 10s, including a runner-up finish.

To honor the 20th anniversary of the September 11 tragedy, NASCAR has partnered with the 9/11 Memorial and Museum to create a decal that will made available to all NCS and Xfinity Series entries to display on their cars this weekend.

“It’s an exciting weekend for everyone at Spire Motorsports,” said Spire Motorsports co-owner TJ Puchyr. “We’re exceptionally proud to welcome Shavelogic into the sport. The entire sport is equally proud to honor the lives of those who were lost and all the sacrifices made by everyone who came together to help their fellow Americans on September 11. It’s going to be a somber weekend in many ways but a very gratifying one at the same time.”

The Salute to America Heroes 400 from Richmond Raceway will be televised live on NBCSN Saturday, September 11 beginning at 7:30 p.m. Eastern Daylight Time. The 28th of 36 races on the 2021 NCS schedule will be broadcast live on the Motor Racing Network and SiriusXM NASCAR Radio.