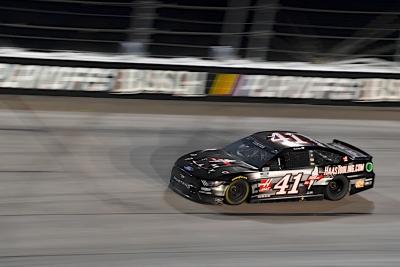 ● The HaasTooling.com Demo Day Ford driver wasted no time in his journey up through the field, making it all the way to 26th before the caution came out on lap 16. Custer reported during the yellow flag that his Ford Mustang was a little too tight but he felt it would get better as the sun went down. The team opted to stay out until the competition caution.

● When the race restarted, Custer was 18th, but he quickly fell back to 28th as he struggled with the balance of his racecar. He was running there when the competition caution came out on lap 25.

● During the caution the No. 41 team pitted for four tires, fuel and an air pressure adjustment to combat a tight racecar. Custer would restart 26th.

● As the race continued, Custer reported that his HaasTooling.com Demo Day Ford Mustang was loose on entry and tight in the center. When the caution came out on lap 48, Custer was running 22nd and the team brought him down pit road for another set of fresh tires, fuel and a wedge and air pressure adjustment.

● When the race went back green, Custer progressed all the way up to 21st before green-flag pit stops began. The No. 41 HaasTooling.com Demo Day team brought their Ford Mustang down pit road on lap 82 for a green-flag pit stop before the stage ended. Custer rejoined the field 28th.

● Custer fought his way up to 22nd by the time the stage ended. During the stage break, the No. 41 team brought their Ford Mustang down pit road for four tires, fuel and another adjustment to combat tightness issues.

● The HaasTooling.com Demo Day Ford Mustang broke into the top-20 on the initial lap of the second stage. Custer made it up to 18th by the time the caution came out on lap 125.

● On lap 159, the No. 41 came down pit road for another green-flag pit stop for four tires, fuel and an adjustment. Custer rejoined the field 20th, one lap down.

● The 23-year-old driver reported that his car was starting to build loose after the sun had set. He was running 20th when the caution came out on lap 164 for debris. Custer took the wave-around to get the lap back.

● The No. 41 HaasTooling.com Demo Day team opted to stay out, as the tire rub had stopped smoking. Custer fell back to 22nd, but he kept the car on the lead lap to finish the stage 21st.

● During the stage break, Custer brought his racecar down pit road for four fresh tires, fuel, a wedge adjustment and repairs to the tire rub. He restarted the final stage in 15th.

● When the race went green on lap 237, the Ladera Ranch, California, native reported that his car was “firing off tight.” He continued to report that issue as he fell back in the field to 20th.

● As the stage progressed, Custer tried new lines on the track to try and find some speed.

● The HaasTooling.com Demo Day Ford team pitted on lap 272 during green-flag stops for four tires, fuel and an air pressure adjustment to combat their tight racecar.

● Custer worked his way back into the top-20 by lap 287 and stayed there until the field made another round of green-flag pit stops. The No. 41 Ford pitted on lap 302 for four tires, fuel and more adjustments.

● With 60 laps to go, Custer reported that his Ford Mustang was just a little too tight in the beginning of that run.

● Custer was in 22nd, one lap down, when the caution came out on lap 319. Crew chief Mike Shiplett made the call to keep his driver out on track to take the wave-around and restart 16th in hopes of another caution.

● The strategy paid off when the caution came out just a few laps later. During that lap-327 yellow, the No. 41 HaasTooling.com Demo Day team brought their driver down pit road for his final stop of the race.

● Custer restarted 11th and ran there until the conclusion of the 367-lap race.

● Custer earned his sixth top-15 of the season and his second top-15 in five career starts at Darlington.

“Today was an up and down day. Our Ford Mustang started to come to us there at the end. Mike (Shiplett, crew chief) made a great call to keep us out in that second-to-last caution and put us back in the race. That strategy worked out in our favor, and we scored another top-15 for this HaasTooling.com Demo Day team.”