Harvick Grits Out Top-Five in Cook Out Southern 500 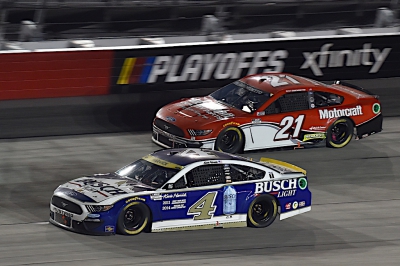 ●  The No. 4 Busch Light Ford Mustang was seventh when the first caution of the race came out on lap 17.

●  Harvick stayed out and lined up seventh for the lap-20 restart, but was up to fourth by the time the field turned one green flag lap.

●  Passed Tyler Reddick for third on lap 24 and then grabbed second from Ryan Blaney on lap 25.

●  Pitted for four tires and fuel during the competition caution on lap 26.

●  Was second for the lap-29 restart and took the lead from Kurt Busch on the newly repaved section in turn two.

●  A caution led to another restart on lap 36, whereupon Harvick continued to lead, opening up a .830 of a second margin over Busch by lap 40.

●  “Balance is good,” said Harvick while under caution on lap 48.

●  Made scheduled, green flag pit stop on lap 82 for four tires and fuel along with right-rear and left-rear wedge adjustments.

●  Reclaimed fifth place by lap 94 and held the spot through the end of the stage.

●  “Loose in (turn) three. No rear grip on exit. Can’t put the throttle down on exit,” said Harvick at the end of the stage.

●  The No. 4 Busch Light Ford Mustang lined up fifth for the lap-123 restart, but fell to ninth before the caution came out on lap 126.

●  Caution on lap 164 for debris, which put all but the top-five cars a lap down. Harvick was 10th and took the wave-around to get his lap back.

●  Was up to seventh when the caution flag waved again on lap 200. Harvick remained in that spot for lap-206 restart.

●  Climbed to fourth by lap 207 and held the position until Ross Chastain passed Harvick on lap 229.

●  “Need more grip pretty much anywhere,” said Harvick at the conclusion of the stage.

●  Pitted for four tires and fuel with a right-rear wedge adjustment at the end of the stage.

●  The No. 4 Busch Light Ford Mustang settled into seventh shortly after going green.

●  “Still needs some rear grip so I can turn,” said Harvick while running sixth on lap 267.

●  Pitted for a loose wheel on lap 288. This dropped Harvick to 23rd and put him one lap down.

●  Being out of cycle on pit stops put Harvick eighth on lap 306, as he was able to stay out while others made their scheduled stops.

●  Caution on lap 318 allowed Harvick to be the “lucky dog” and earn his lap back, as he was the first car one lap down.

●  Pitted for four tires and fuel with a left-rear wedge adjustment on lap 321. Took the time to fix some right-side damage.

●  Harvick was seventh when the caution came out again on lap 327 and held that same position for the lap-331 restart.

●  Quickly rallied to fifth on the restart before Martin Truex Jr., took the spot from Harvick on lap 345.

●  Harvick was not to be denied a top-five. He passed Joey Logano for fifth on lap 352 and held the position through the finish, despite driving on a flat right-rear tire during the final two laps.

●  Harvick’s 12 top-fives and 17 top-10s at Darlington are the most among active NASCAR Cup Series drivers.

●  This was Harvick’s seventh straight top-15, a streak that began July 11 with an 11th-place finish at Atlanta Motor Speedway.

●  Harvick led once for 20 laps, increasing his laps led total at Darlington to 802.

●  Denny Hamlin won the Cook Out Southern 500 to score his 45th career NASCAR Cup Series victory, his first of the season and his fourth at Darlington. His margin over second-place Kyle Larson was .212 of a second.

“We finished on a flat tire. We had to pit for a loose wheel or a tire coming apart or something and got a lap down, and then got the lucky dog and just a lot going on. That’s pretty typical of this race, though. I just want to thank everybody on our Busch Light Ford Mustang. Our guys have done a great job. We led a bunch of laps early and had a fast racecar and were able to capitalize on a good day. This is just always one of those races that has a lot of stuff happen and you have to keep yourself rolling and keep your car clean, and that’s what we did tonight. We had a few little issues, but we worked through them and were able to have a fast enough car that we could run top-five and the rest of it, for us to run first or second we would need to be first or second like we were earlier in clean air. When we had the clean air we drove away, so it’s just kind of the way it is everywhere.”

Playoff Standings (with two races to go before Round of 12):

The next event on the NASCAR Cup Series schedule is the Federated Auto Parts 400 Salute to First Responders on Saturday, Sept. 11 at Richmond (Va.) Raceway. The second race of the 10-race NASCAR Playoffs starts at 7:30 p.m. EDT with live coverage provided by NBCSN and SiriusXM NASCAR Radio.