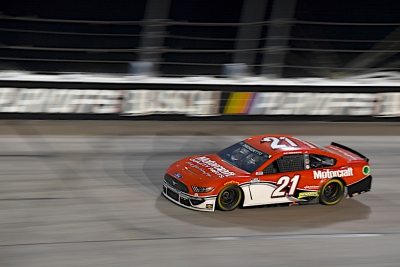 A seven-race stretch of strong runs came to an end Sunday night for Matt DiBenedetto and the No. 21 Motorcraft/Quick Lane team as they struggled to a 23rd-place finish in the Cook Out Southern 500 at Darlington Raceway.

DiBenedetto started the 500-miler at NASCAR’s original superspeedway from 30th place, the line-up having been set based on results from Daytona the week before. At Daytona, DiBenedetto was involved in a crash while racing for the lead in the closing laps.

On Sunday night, driving a throwback paint scheme honoring the 20th anniversary of the Wood Brothers pairing with sponsor Motorcraft, DiBenedetto worked his way halfway to the front by the 42nd of 367 laps.

But he was unable to sustain the forward progress, in large part due to a loose-handling condition. He fell off the lead lap just past the 100-lap mark and ended the first Stage in 26th place, one lap behind the leaders.

He finished the second Stage in 24th place, as crew chief Jonathan Hassler used each pit stop to address the handling issues on the Motorcraft/Quick Lane Mustang.

The team was able to correct the loose-handling condition, but was soon dealing with a tight-handling car.

At times, DiBenedetto was able to get in position to claim the free pass and rejoin the lead lap, but for the most part, the caution flags didn’t fly in his favor and he wound up 23rd at the finish, two laps in arrears.

“We were hoping for a better run to celebrate 20 years with Motorcraft/Quick Lane, but it wasn’t to be. Motorcraft and Ford Motor Company have been really great to us for  many years, and we thank them for that.”

The Wood Brothers and DiBenedetto now turn their attention to Richmond Raceway and next Saturday night’s Salute to American Heroes 400.