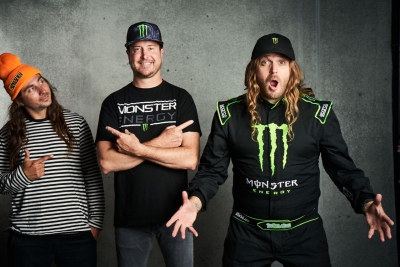 Start your engines for a special episode! Monster Energy is proud to welcome NASCAR Cup Champion and racing icon Kurt Busch on Episode 13 of the sports and pop culture podcast UNLEASHED with The Dingo and Danny. The one-hour episode features the professional racer who will pilot the No. 45 Monster Energy Toyota Camry car for 23XI Racing (pronounced ‘twenty-three eleven’) beginning with the 2022 NASCAR Cup Series season.

“It was a moment cemented in my memory and in my soul, when I knew that I wanted to be a racer full-time,” said Busch on the UNLEASHED episode while looking back on the start of his racing journey.

Fans can tune in for the full story now, including the sibling rivalry with Busch’s younger brother Kyle. Released today, the new episode featuring Busch is streaming on all major platforms, including Spotify, iTunes and YouTube.

One of the most prominent racers in history, Busch has seen and won it all: His 32 victories include the 2004 NASCAR Sprint Cup Championship, Coca-Cola 600 (2010), and the Daytona 500 (2017). In conversation with the two podcast hosts, Australian action sports personality Luke “The Dingo” Trembath and professional snowboarder Danny Kass, Busch relives career milestones and outlines the future of motorsports.

Born and raised in Las Vegas, Busch grew up in a racing household thanks to his father. “We had Hot Rods and Street Rods in the garage all the time. My dad raced, and as early as I can remember I was going to the track to watch!” And although his mother tried to nudge him into little leagues baseball, the passion for motorsports prevailed. “With racing, it was so easy to be there with my dad. When I was 15 years old, he sent me on a road trip to pick up a racing chassis. And when I brought it back, he said, ‘That’s your car!’”

The rest is the stuff of NASCAR legend. After achieving his breakout season in the Winston Cup Series in 2002, Busch advanced to ride for the most prominent racing teams on the circuit. Speaking on his first sponsorship deal, Busch said: “I got picked up by Roush Racing and the team was based in Michigan. So, I moved all my stuff in a moving van from Las Vegas to Detroit.”

In his first race at Daytona, the rookie took second place. “Stuff clicked. A lot of it was luck. And a lot of it was just that racer sixth sense of just doing it,” said Busch about the key to his early success.

Revisiting key moments in his career, Busch shared the secret of how he conserved his fuel until the last moment to win the legendary Daytona 500 race in 2017: “That was my move and I pulled it off! I was able to make the pass on my last lap. Barely made it through and saved enough fuel for some victory burnouts in the grass, then the car fizzled out on the way to Victory Lane. They had to push me!”

On the episode, Busch also confesses his admiration for the hit comedy Talladega Nights: The Ballad of Ricky Bobby. “I love it! It’s self-deprecating humor and making fun of ourselves. Like when they sit down in the dinner table scene and Ricky Bobby has to thank all the sponsors. That movie is incredible with what it did for our sport with Will Ferrell.”

Speaking on the current state of NASCAR, Busch is especially excited about the return to racing in front of crowds. “It takes the people to make it happen! Post Covid, we’re getting fans back to the tracks and keeping things to a protocol where everybody’s still safe. But it’s awesome to get back to some normalcy.”

Asked about the future of NASCAR, Busch allows a glimpse into the rise of next-gen cars that will change the dynamics of racing and team ownership. But better hear for yourself! Visit the landing page to access Episode 13 of the UNLEASHED with The Dingo and Danny Podcast with Kurt Busch.

Also look forward to Episode 14 of the podcast featuring the “Queen of the Superpipe”, current FIS Snowboard Halfpipe World Champion and Olympic gold medalist Chloe Kim. Tune in on September 20, 2021, when The Dingo and Danny talk all things snowboarding with the 21-year-old phenom and six-time X Games gold medal winner from Long Beach, California.

Episodes of UNLEASHED are filmed on a special set inside Studio M at Monster Energy headquarters in Corona, California. The podcast is hosted by the dynamic duo of Australian action sports personality Luke “The Dingo” Trembath and professional snowboarder Danny Kass. Known for their deep roots in action sports culture, the two starred in the beloved cult TV show ‘The Adventures of Danny and The Dingo’ on Fuel TV for five action-packed seasons in the early 2010s. Both hosts have walked the walk as pro snowboarders and possess the interview skills to find common ground with guests from any type of background – sports and pop culture. Always look out for new episodes dropping bi-weekly on Mondays.

The UNLEASHED with The Dingo and Danny Podcast is here to celebrate the personalities behind the Monster Energy lifestyle. With each episode dedicated to a unique guest or topic, listeners learn about living on the edge and advancing the state of the art in the world of high-energy sports as well as music, games, and pop culture from individuals at the top of their game. More than a drink, Monster Energy is a way of life lived by athletes, sports, bands, believers, and fans – and the podcast is an extension of this unique DNA.