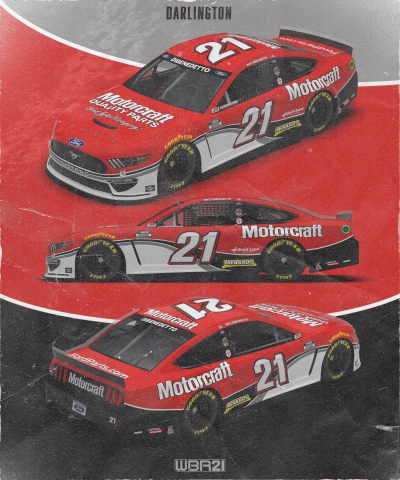 Matt DiBenedetto and the No. 21 Motorcraft/Quick Lane team head into Sunday’s Cook Out Southern 500 at Darlington Raceway with some current momentum and some long-term team history on their side.

DiBenedetto and the Wood Brothers team have been on a roll lately, finishing in the top 11 six-straight times before being involved in a crash while racing for the lead at Daytona last Saturday night.

And the iconic No. 21 Mustang will be carrying a throwback paint scheme honoring the 21st straight year of Motorcraft backing the Wood Brothers team.

It also celebrates the 20th anniversary of Elliott Sadler’s first Cup win, which came at Bristol Motor Speedway in the Motorcraft-sponsored Wood Brothers Ford. That was the first victory for the Wood Brothers/Motorcraft pairing.

DiBenedetto said driving the Motorcraft/Quick Lane Mustang, with its throwback paint scheme, in the fabled 500-miler at the NASCAR’s original superspeedway is a combination to be proud of.

“The Southern 500 is a big one, especially when driving the 21 there,” he said, adding that he’s disappointed to not be a part of the 10-race Playoffs, which begin Sunday night.

“It stinks we missed the Playoffs, but the amount of momentum we have as a team is awesome,” he said.

The 71-year-old Darlington track, known as the Lady in Black, is always challenging for drivers, but this year there will be a new factor involved. Turn Two has been repaved to prevent seepage of water in the event of rain prior to the races, according to published reports.

“It’s going to be interesting to watch the races before us to see how the new asphalt in Turn Two affects the cars and the racing,” DiBenedetto said.

There will be no practice or qualifying prior to the start of Sunday’s Cook Out Southern 500. DiBenedetto will line up 30th, as the starting order was set based on results from Daytona, where he finished 25th.

NBCSN will carry the TV broadcast.