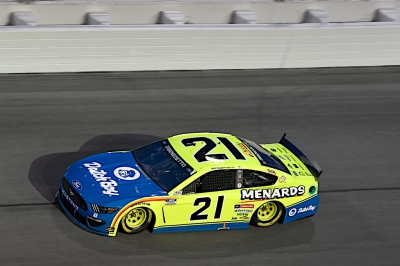 Matt DiBenedetto and the No. 21 Menards/Dutch Boy team put themselves in position to win Saturday night’s Coke Zero 400 at Daytona International Speedway, but their involvement in a late-race, multi-car crash knocked them out of contention for a win and the Playoff berth that would have come with it.

DiBenedetto and the Menards/Dutch Boy team earned the ninth starting spot for Saturday’s regular season finale and took the green flag in seventh place. The team’s strategy called for playing defense early on, so they rode near the back of the pack for most of the first two Stages, hoping to avoid damage to their No. 21 Mustang.

Those plans worked as he finished 27th in both Stages but had an unblemished Mustang to put to work in the final segment of the race.

DiBenedetto and his fellow Ford drivers were able to leapfrog to the front after the Blue Oval contingent made their final pit stops under the green flag on Lap 123.

When the caution flag flew on Lap 141 and their competitors drove to pit road, the Fords cycled to the front, with DiBenedetto lining up in fourth place for the restart.

His outside line didn’t advance, and he dropped to seventh place but had recovered to sixth place when the next caution flag - and eventually the red flag - flew.

Back under green, DiBenedetto initially dropped to the back of the top 10 as the outside line didn’t keep pace, but he worked his way into the lead with four of the scheduled 160 laps left to run.

But his chances for victory ended there after contact with Chase Elliott took him out of contention and brought out a caution flag that extended the race into Overtime.

DiBenedetto recovered to finish 26th as the race ended under caution for another multi-car crash.

“Our strategy going into the race was to be smart and be there when it counted,” DiBenedetto said. “We worked on the car, got it right and had a shot at winning.”

DiBenedetto said he wasn’t surprised when Elliott moved to block him as the Menards/Dutch Boy Mustang surged forward.

“We had prepared for that exact scenario,” he said. “We had a good push and a huge run.

“We were all racing for the win, so there are no hard feelings. But [Elliott] double blocked us, and we had too big a run for him to do that.”

Despite being disappointed by the outcome, DiBenedetto’s focus remained on the positives.

“No regrets,” he said. “We did everything right.

“Our Menards/Dutch Boy team should be proud. We’ll take our good momentum and go get a win.”

DiBenedetto and the No. 21 team now head to Darlington Raceway for next Sunday’s Cook Out Southern 500.