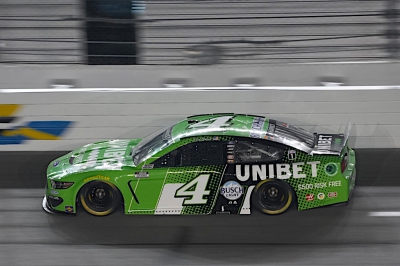 ●  Harvick wheeled his No. 4 Unibet Ford Mustang around the low line of the 2.5-mile oval, climbing to seventh by lap three.

●  Harvick opted for the high line on lap four and promptly rose to third.

●  Harvick held the top spot for two laps until Byron reassumed the lead.

●  Harvick was 15th when the competition caution came out on lap 20, whereupon he pitted for four tires and fuel.

●  Harvick held steady at the back of the lead pack through the end of the stage, ultimately finishing 27th.

●  Harvick pitted for four tires and fuel at the end of the stage, and then pitted again to top off with fuel before the start of the second stage.

●  Harvick climbed to 16th by lap 65 while utilizing the high line.

●  The No. 4 Unibet Ford Mustang withstood a shot in the rear bumper when cars got stacked up on lap 77 and caused an accident.

●  Harvick was able to keep his car steady and he took advantage of the caution to pit for four tires and fuel on lap 80.

●  Pitted for right-side tires and fuel at the end of the stage.

●  The jockeying up front was intense. Harvick kept his head, running the inside lane and dropping to eighth on lap 118.

●  By lap 120, Harvick was back up to fifth, using the inside lane to make his way toward the front.

●  Made scheduled, green flag pit stop for fuel only on lap 123 with fellow Ford drivers.

●  Was 28th when the caution flag waved on lap 140 for a four-car accident off turn four.

●  Harvick stayed out to gain some track position, restarting in eighth on lap 145.

●  The caution flag waved again on lap 147 for a multicar accident on the backstretch that happened just behind Harvick.

●  An 11-car melee erupted off turn four on lap 158, but Harvick deftly maneuvered through the chaos and came out unscathed.

●  Harvick was fifth for the lap-164 restart as the race was set to go into overtime with a green-white-checkered finish.

●  Harvick used the draft to his advantage and was third going into the final lap with momentum pushing him toward the lead.

●  A bump from the car behind him while in turn three on the final lap sent Harvick spinning. The Unibet Ford Mustang bounced off the wall and into other cars. Harvick was able re-fire his machine and limp what was left of it across the finish line to bring home a 15th-place result as the last car on the lead lap.

●  Harvick qualified for the playoffs by virtue of his ninth-place finish in the regular-season standings.

●  This is Harvick’s 12th consecutive playoff appearance and his 15th overall. He won the championship in 2014.

●  Ryan Blaney won the Coke Zero Sugar 400 to score his seventh career NASCAR Cup Series victory, his third of the season and his first at Daytona. His margin over second-place Chris Buescher was .773 of a second.

●  There were eight caution periods for a total of 31 laps.

Kevin Harvick, driver of the No. 4 Unibet Ford Mustang for Stewart-Haas Racing:

“I didn’t see anything. I got hit in the left-rear quarterpanel and then we wrecked a lot, but everybody on our Unibet Ford Mustang did a good job. We had a shot there at the end and that’s all you can ask, and just wound up in a wreck.”

The next event on the NASCAR Cup Series schedule is the Cook Out Southern 500 on Sunday, Sept. 5 at Darlington (S.C.) Raceway. The first race in the 10-race NASCAR Playoffs starts at 6 p.m. EDT with live coverage provided by NBCSN and SiriusXM NASCAR Radio.