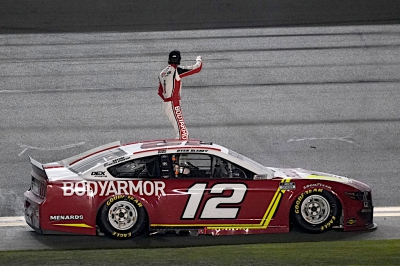 Ultimately, Team Penske’s Ryan Blaney managed it all and took his second NASCAR Cup Series victory in as many weeks as a huge multi-car accident happened behind him in the last corners of the track on the final lap.

Blaney’s No. 12 Team Penske Ford led only seven of the 165 laps, but the 27-year-old North Carolinian took the lead from fellow Ford driver Roush Fenway Racing’s Chris Buescher for the two laps of overtime to claim his third win of the season and seventh of his career.

Richard Childress Racing’s Tyler Reddick earned the 16th and final Playoff position with a fifth-place finish in a close and suspenseful battle with his own teammate Austin Dillon.

“How about that," Blaney said. “That was a lot of fun. Gosh, we just barely missed that wreck. Got to line up on the front row and got a good push by the 7 (Corey LaJoie). You never know how the end of these things is going to play out. Down the back you don’t know what lane is getting a bigger run. I guess someone got tangled up over there, hopefully everyone is okay."

LaJoie was one of the drivers who was collected in that nine-car crash in Turn 3 on the final lap. He was one of four drivers – including Austin Dillon, Ross Chastain and Daniel Suarez – running among the top-10 on the final restart and needing a victory to qualify for the Playoffs. Instead, all four of them were unfortunately involved in the final incident that eliminated much of the front-running pack.

Kyle Larson, who has a series-best five wins on the season, clinched his first NASCAR Cup Series Regular Season Championship with a 21st-place finish. Both he and Denny Hamlin were in the last lap wreck. Hamlin, who has led the points standings for all but three of the previous 25 race weekends, finished 14th.

Blaney’s Daytona wins caps an impressive summer run that is good enough to move him into second place in the Playoff standings – 28 behind Larson – heading into next week’s Playoff opener at Darlington (S.C.) Raceway.

“Got good momentum," Blaney said smiling. “Nice to make it three in a row. We’ll see."

Bubba Wallace, who led eight laps late in the race, finished second – his best result of the 2021 season. Ryan Newman, Ryan Preece and Tyler Reddick rounded out the top five; a season best for Newman and Preece as well.

Haley was sixth, followed by Alex Bowman, who won the Xfinity Series race earlier in the afternoon. Chase Elliott, B.J. McLeod and Josh Bilicki rounded out the top 10. It was McLeod’s first top-10 finish in 76 NASCAR Cup Series starts.