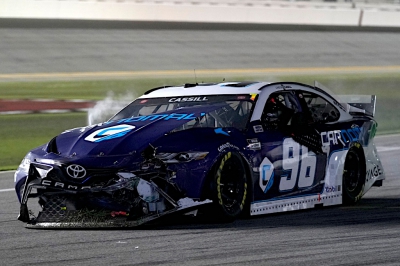 ● The No. 96 Carnomaly Toyota Camry quickly made its way up through the field and gained 10 spots by lap two of the 160-lap race. Cassill ran around that spot until the lap-20 competition caution. He was running 30th when the caution came out.

● After a quick pit stop for fuel only, the No. 96 Carnomaly driver came back out in 20th, his first time in the top-20 this race.

● When green-flag racing resumed on lap 25, Cassill continued his journey through the field, making it as high as 10th while running in the lead pack.

● Ultimately, Cassill lost the lead draft and fell back in the pack in the final 15 laps of the stage. He finished 26th.

● During the stage break, Cassill brought his No. 96 Carnomaly Toyota Camry down pit road for four tires and fuel. He reported the balance was good and he felt secure in the car.

● When the second stage got underway, the No. 96 Carnomaly driver worked his way up to 11th after just three laps into the run.

● After battling with the draft, Cassill fell back in the pack to 24th in the initial laps of the stage. He worked his way up into the top-20 by lap 70.

● Cassill avoided the lap-78 wreck that brought out the caution and restarted the race on lap 81 in 15th.

● Just two laps into the run, Cassill was sitting ninth, breaking into the top-10 for the second time of the race.

● As the second stage came to an end, Cassill was shuffled back to 24th.

● During the stage break, Cassill reported that his No. 96 Carnomaly Toyota Camry was continuing to be consistent and stable. The team pitted for four tires and fuel.

● The No. 96 Carnomaly Toyota Camry got shuffled back in the pack on the restart and fell all the way to 36th in the opening laps of the stage.

● As the run continued, Cassill was able to work his way up to 12th with the help of the draft.

● On lap 124, Cassill reported that he needed to bring his No. 96 Carnomaly Camry down pit road soon. The team opted to stay out, which worked in their favor as Cassill worked his way up into the top-five before the caution came out on lap 138.

● During the caution, the No. 96 Carnomaly team pitted for fuel only. Cassill restarted 17th when the race went back green on lap 144.

● Unfortunately, Cassill was caught up in the lap-147 wreck, abruptly ending his strong run at Daytona. The No. 96 Carnomaly Camry could not continue the race due to the damage sustained. Cassill was credited with 37th place.

●  Ryan Blaney won the Coke Zero Sugar 400 to score his seventh career NASCAR Cup Series victory, his third of the season and his first at Daytona. His margin over second-place Chris Buescher was .773 of a second.

●  There were eight caution periods for a total of 31 laps.

Landon Cassill, driver of the No. 96 Carnomaly Toyota Camry:

“We had a pretty decent race going, and it was shaping up at the end. We proved what we had there going into the last stint since the last pit stop. The No. 96 Carnomaly Camry was running in the top-five with the other Toyotas. That was really the first time all day I had gotten my car in the outside lane, and it ran really well up there. I was really proud of that and really proud of the race we ran. It stinks. At Daytona it’s really hard to miss these wrecks, but you can always do something different. I’ll certainly replay that one in my mind many times, but it’s over now.”