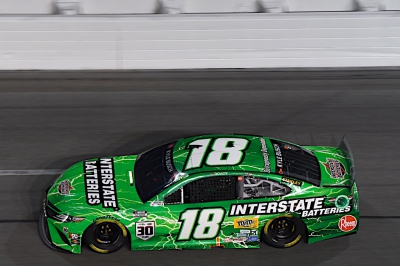 ● Busch started in the top-five with his Interstate Batteries Toyota and held his spot up toward the front of the field.

● The driver of the No. 18 came for a fuel-only stop on lap 22 during the caution for the competition yellow and then restarted 13th on lap 24.

● The Interstate Batteries Toyota driver worked his way back up through the field and into the top-five. He reached the third spot to end Stage 1.

● The Interstate Batteries Toyota came to pit road following the stage on lap 53 to take on four tires and fuel. The No. 18 over-the-wall team performed an impressive stop, putting him to the lead off pit road.

● With the team hoping to make the next 50-lap stage without having to stop, crew chief Ben Beshore made the decision to come back to pit road with one to go before the field took the green for Stage 2 to top off the fuel tank, helping to ensure they made the entire stage on one tank of fuel.

● The Interstate Batteries driver restarted deep in the field, but he moved up quickly again, reaching the third spot by lap 60.

● Busch got shuffled out of the draft with three laps go in the stage and lost a few spots, but he still earned stage points by finishing eighth in the second stage.

● The Interstate Batteries driver restarted the final stage within the top-10 and held his spot up front until the caution waved on lap 140.

● Busch came to pit road two laps later to take on fuel only and restarted in the ninth position.

● The Interstate Batteries driver fell to 13th. As the field came out of turn four on lap 156, Busch was caught up in a multicar accident ahead of him and was not able to finish the race after what had looked like a promising night of running up front.

“There was a bunch of blocking going on, and guys got crossed up. I don’t know if anyone touched me, I just lost it trying to check up and stay out of it. Just frustrating to come to these places and wonder if you are going to walk out of here. Thanks to Interstate Batteries, Toyota and M&M’S. And we’ll see what we can do next week.”