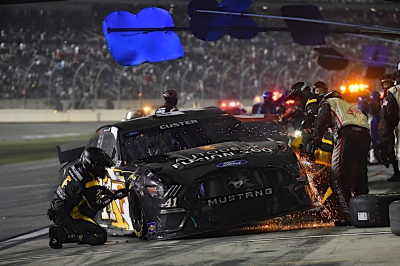 ● The Autodesk Fusion 360/HaasTooling.com Ford made steady forward progress from the wave of the green flag. Custer cracked the top-10 by lap 15 and was eighth when the competition caution flag flew on lap 20. Custer said his racecar started out “a little free,” but then he began “losing the front end a bit.” He pitted for fuel only and restarted second on lap 25.

● Custer held his position in the top-three, climbing up to second on laps 42 and 43, before pulling out of line and dropping back to 18th by the end of the stage. He said his Mustang now was “just a bit tight, but pretty good there at the end.” He pitted during the break for four tires and fuel, then pitted a second time a lap later to top off the fuel tank.

● The Autodesk Fusion 360/HaasTooling.com Ford moved up to 18th during the opening laps of the stage and maintained that relative position. Custer was running 22nd when the first incident-related caution flag appeared on lap 77. Custer cleared the four-car incident in turn four before reporting he liked the balance of his racecar, even though it was “a tick tight.” He pitted for four tires, fuel and a left-rear track-bar adjustment and restarted 19th on lap 81.

● Custer again made forward progress on the restart and reached the top-15 within two laps. He held that relative position before the final laps of the stage, when he again stepped out of line to “keep from getting wrecked.” He asked to have his Mustang “freed up a little bit” before pitting for four tires, fuel and another track-bar adjustment.

● The Autodesk Fusion 360/HaasTooling.com Ford driver held his position for the first 18 green-flag laps of the stage before hitting pit road on lap 123 with the rest of the Fords for a round of fuel-only stops. Custer said his Mustang was “still too tight here,” but he was able to manage the issue.

● An eight-car accident on the backstretch behind Custer less than two laps later brought out the caution flag after he had moved up to fifth place. The race was red-flagged for 14 minutes, 51 seconds before resuming under caution on lap 147. Custer restarted fifth on lap 150.

● Custer stayed in the top-five for the next several laps before losing the draft. He was still holding position in the top-10, but he got collected in an 11-car accident in turn four on lap 156. The Autodesk Fusion 360/HaasTooling.com Ford suffered damage that required multiple trips down pit lane for repairs.

● Custer restarted 26th for the green-white-checkered finish on lap 163. He picked up one position before the checkered flag.

“Bad luck – if we didn’t have that, we wouldn’t have any luck at all after something like that. We had a good Autodesk Fusion 360/HaasTooling.com Ford and were in a good position at the end, but we just couldn’t take advantage of it. It’s disappointing, but we can only look ahead and see we have 10 more chances to get to victory lane.”