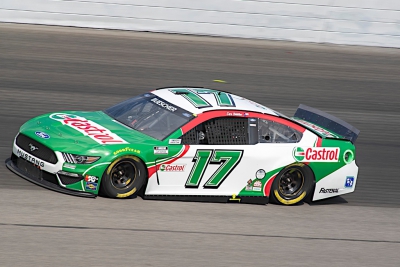 Roush Fenway Racing driver Chris Buescher battled his way to a 15th-place finish in Sunday’s NASCAR Cup race at at Michigan International Speedway – picking up the final position on the last lap of the 200-lap event. Buescher spent much of the day patiently working his No. 17 Castrol Ford Mustang through the field, ultimately earning his second top-15 finish in the past two weeks.

“We had good speed in our Castrol Ford Mustang,” said Buescher after the race. “Clean air was pretty much the key, but we survived a couple of close calls at the end there and ended up with a pretty descent finish. We wanted more, but not a bad run today.”

Buescher started the race 11th, but after struggling with the Ford’s handling early he dropped back to 25th by the end of the race’s first stage. Buescher would run as low as 29th by lap 70, but moved back inside the top 20 just after the start of the race’s third and final stage. Working an alternate pit strategy, Buescher moved all the way to second position before pitting for the final time on lap 169.

The strategy proved successful, with the No. 17 Castrol Ford never running outside the top 16 again, and Buescher survived a pair of late cautions to bring home the 15th-place finish.

The team returns to action next week at Daytona International Speedway, for the regular-season finale.