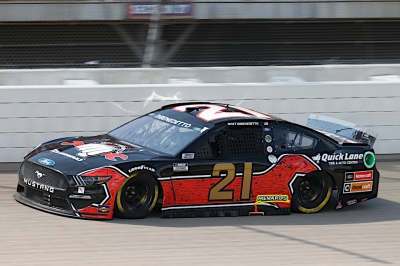 Matt DiBenedetto and the No. 21 Motorcraft/Quick Lane team ran their string of strong runs to six with an impressive sixth-place finish in Sunday’s FireKeepers Casino 400 at Michigan International Speedway.

It was their sixth-straight finish of eleventh or better, a streak that started with a 10th-place finish at Road America on the Fourth of July.

On Sunday at Michigan, DiBenedetto lined up fourth for the drop of the green flag and bettered that immediately. He led the third lap and was running third when the Competition Caution flag flew at Lap 21.

He remained in the top 10 for the remainder of the first Stage and ended that 60-lap segment in seventh place, earning four bonus points.

The Motorcraft/Quick Lane Mustang was fast again in Stage Two, running in the top five for much of that segment before ending the Stage in 10th place, earning one more point.

In the third and final segment of the race, DiBenedetto continued to run in the lead pack, but lost some spots on a green flag pit stop with just over 30 laps left to run, coupled with a loose-handling condition, put him outside the top 20.

Then, he and the Motorcraft/Quick Lane team put on a show.

He began his march to the front, an effort that was bolstered by crew chief Jonathan Hassler’s decision to pit under the next-to-last caution for four fresh tires. DiBenedetto, with his handling issues resolved, dodged wrecks, made bold moves, and was able to race his way into the top five, losing one spot on the final lap to finish sixth.

“We had a rocket for a while,” DiBenedetto told reporters after the race. “Then, something went sideways. We didn’t change anything, but we lost the handle on it. I am not sure what exactly happened.

“Either way, we made good calls, and the team did a good job. We got the day going really good and were really fast and then had some things go wrong.”

But he and the team fought back and as he said, he was able to “outcrazy” many of his competitors to finish sixth and back up his fifth-place finish from Indianapolis the week before.

“We were super aggressive and made it back up,” he said. “It was a proud team effort.”

DiBenedetto remains 16th in the Cup Series standings, but will need to win on Saturday night at Daytona International Speedway to earn a spot in the season-ending, championship-deciding Playoffs.

“We will study up and be prepared for it, and go try and make it happen,” he said.

Eddie Wood said it was a good day for his team and for Ford Motor Company at Michigan.

“We were really glad to have a good run with the Master Tech paint scheme on the No. 21,” he said. “The work those technicians do is important to all of us.

“And we were happy to see our former driver Ryan Blaney and our friends at Team Penske deliver Ford its seventh-straight Cup Series victory at Michigan.”