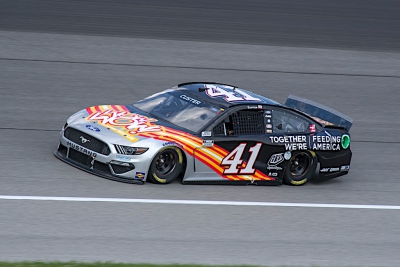 ● The Feeding America/Wow Wow Classic Waffles Ford started out “a little free” and progressively developed an extreme loose condition by the lap-20 competition caution flag, as Custer was running 29th. He pitted for four tires and a left-rear wedge adjustment and restarted 24th when the race went back to green on lap 25.

● The caution flag flew again on lap 30 for a single-car accident in turn two, with Custer having fallen back to 30th while continuing to fight a loose condition. He pitted once again for fuel and track-bar adjustments across the rear. He restarted 28th on lap 35.

● Custer picked up one position over the final 25 laps of the stage while still having to deal with the loose condition. He pitted during the break for four tires, fuel, a right-front packer adjustment and a track-bar adjustment.

● The Feeding America/Wow Wow Classic Waffles driver said the changes made thus far improved the loose handling of his racecar but that it would need more of the same. He held his relative position through the majority of the run before creeping into the top-25 with 20 laps to go in the stage. He then worked his way up to 17th as the field cycled through green-flag pit stops in the closing laps. He pitted on lap 110 for four tires, fuel and more track-bar adjustments and settled in 28th.

● Custer picked up one position over the final nine laps and stayed on track during the break.

● The Feeding America/Wow Wow Classic Waffles driver stayed solidly in the top-15 for a majority of his initial fuel-and-tire run of the stage, then began “losing the right front.” He fell back to 22nd as he approached his final scheduled green-flag stop, earlier than a majority of the field, on lap 157. He took four tires, fuel and track-bar adjustments and resumed in 27th.

● Custer was up to 23rd when a brief rain shower brought out the caution flag on lap 179. When the pits opened four laps later, crew chief Mike Shiplett brought Custer down pit road for four tires and a track-bar adjustment to help improve grip to the right front for the final sprint to the finish. The Ladera Ranch, California, native restarted 21st on lap 186.

● The caution flag flew again for a seven-car incident as the field exited turn four on the restart lap. Custer kept his Feeding America/Wow Wow Classic Waffles Ford out of trouble and emerged in 23rd place.

● Custer restarted 20th on lap 192 but was shuffled back three positions on his way to the checkered flag.

●  Ryan Blaney won the FireKeepers Casino 400 to score his sixth career NASCAR Cup Series victory, his second of the season and his first at Michigan. His margin over second-place William Byron was .077 of a second – the closest Cup Series finish in track history since the advent of electronic scoring in 1993.

●  This was Ford’s 710th all-time NASCAR Cup Series victory and its seventh straight at Michigan.

●  This was Ford’s series-leading 42nd win at Michigan, which is the most at any track currently on the NASCAR Cup Series schedule. Ford scored its first Michigan win with NASCAR Hall of Famer David Pearson on Aug. 17, 1969.

●  There were six caution periods for a total of 29 laps.

●  Twenty-six of the 37 drivers in the FireKeepers Casino 400 finished on the lead lap.

●  Kyle Larson remains the championship leader after Michigan with a 28-point advantage over second-place Denny Hamlin.

“It was a frustrating day, for the most part. We started out really, really loose with our Feeding America/Wow Wow Classic Waffles Mustang and kept working on it. We made improvements each time, but it never quite got to where we could make significant forward progress. This is a tough track to get everything right, especially with no practice or qualifying. It’s on to Daytona next week, where anything can happen, and we’re certainly going to try and make something happen in the last race before the playoffs.”

The next event on the NASCAR Cup Series schedule is the Coke Zero Sugar 400 on Saturday, Aug. 28 at Daytona (Fla.) International Speedway. The regular-season finale starts at 7 p.m. EDT with live coverage on NBC and SiriusXM NASCAR Radio.