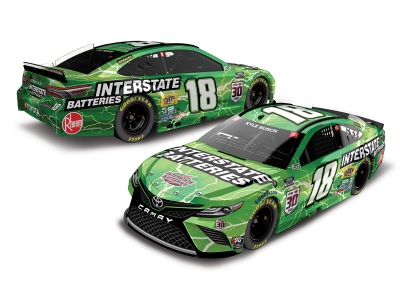 Many families across the United States use the summer months to take a road trip and make memories along the way.

Kyle Busch, driver of the No. 18 Interstate Batteries Toyota Camry for Joe Gibbs Racing (JGR), his wife Samantha and 6-year-old son Brexton decided they were going to take a summer road trip of their own as they toured the Midwest so Brexton could try out multiple tracks during his budding racing career.

The “Midwest Road Trip,” as the Busch family called it, has included stops in Iowa, Illinois, and Wisconsin, with stopovers in New York for the NASCAR Cup Series race at Watkins Glen (N.Y.) International and Indianapolis for the inaugural Cup Series road-course race at Indianapolis Motor Speedway. Their voyage has included a few trips in the family moterhome, as well as a few airplane rides. While the Busch family returned home this week to the Charlotte, North Carolina, area, they have one more Midwest stop on the docket as NASCAR’s top series makes its way to Michigan International Speedway in Brooklyn for Sunday’s FireKeepers Casino 400 for the annual late-summer visit to the Irish Hills that means fall is on the horizon.

With Interstate Batteries returning to the No. 18 car this weekend while continuing to celebrate their 30th anniversary together in 2021, Busch is encouraging fans to stop by a local Interstate dealer to get their vehicle batteries checked before taking off on their late-summer vacation, much like they did before their own Midwest racing tour. Hot weather has a far greater effect on batteries than the cold, so this weekend’s race at a popular summer tourist destination like the Great Lakes State is the perfect setting to remind fans to have their batteries checked.

The Michigan race signifies not only the end of summer, but the winding down of the Cup Series regular season. Busch has been consistent during this year’s summer stretch. In the last nine races on the schedule, starting with the June event at Sonoma (Calif.) Raceway through last weekend’s race on the Indianapolis road course, Busch has a win at Pocono (Pa.) Raceway highlighting an impressive six top-five finishes.

In the Irish Hills of Michigan this weekend, Busch will look to keep running up front at a place where he initially struggled following the 2012 repave of the 2-mile oval. The Las Vegas native has scored eight consecutive top-10s and no finish worse than sixth in his last six starts there.

So, as Busch and the Interstate Batteries team head back to the Midwest this weekend with an “Outrageously Dependable” Interstate Battery under the hood, the confidence built from a summer spent running up front will do them well this weekend. But Busch also knows chances are he’ll need to outduel several others in order to capture his second career Cup Series victory in the Irish Hills, which would be a perfect way to cap off an enjoyable family road trip around the Midwest.