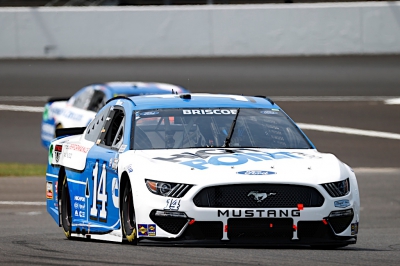 ● The HighPoint.com/Ford Performance Racing School driver took the lead for the first time on lap two and stretched out a lead over William Byron in second.

● With five laps to go in the first stage, Briscoe reported the No. 14 Ford Mustang needed more rear lateral grip and forward drive. He made a scheduled green-flag pit stop with three laps remaining in Stage 1 for tires, fuel and adjusments, and returned to the track in the 11th position.

● Briscoe picked up two additional spots to finish the first stage in ninth.

● Under caution during the stage break, Briscoe was asked to reset the ECU in the No. 14 Ford Mustang. He lost pace and was forced to restart in the fifth position.

● Briscoe slipped back to sixth on the lap-20 restart and was in a heated battle for fifth when the No. 5 of Kyle Larson got into his right side. The HighPoint.com/Ford Performance Racing School driver lost two spots but furiously worked his way back up to seventh over the next lap around the 2.439-mile course.

● With seven laps remaining in the second stage, Briscoe radioed from the sixth position that his front turn was hurting his forward drive.

● Briscoe made a scheduled green-flag pit stop on lap 33 for fresh tires, fuel and adjustments. He rejoined the field in 19th and worked his way to 15th before the conclusion of Stage 2.

● The No. 14 team stayed on track during the stage break with Briscoe inheriting sixth for the lap-40 restart. When the race returned to green, the HighPoint.com/Ford Performance Racing School driver got a good restart and moved into the fourth position through turn one.

● The third caution of the race occurred on lap 42 with Briscoe reporting his front turn was better but he still needed a little help with handling. He lined up fourth for the restart on lap 44.

● Briscoe locked up the brakes on lap 45 and told the team he might have flat-spotted the tires. He fell back to the 11th position while taking car of the No. 14 until he was within his fuel window to make his final pit stop.

● After a scheduled green-flag stop on lap 52 for tires, fuel and adjustments to give him more rear grip and front turn, he rejoined the field in 34th.

● Briscoe re-entered the top-20 on lap 56 as green-flag stops continued to cycle through.

● Another flat-spotted tire sent Briscoe back to the pits under green-flag conditions for a fresh set on lap 65. He was scored in the 32nd position after the stop and progress to 30th before the yellow flag waved once again on lap 74. As the leaders pitted. The No. 14 Mustang remained on track and Briscoe lined up second for the restart on lap 76.

● After the caution flag was shown once again on lap 79, Briscoe restarted third for the first attempt at a green-white-checkered finish on lap 88, a run that was halted by the second multicar incident in a 12-lap span that brought out the red flag a second time.

● The HighPoint.com/Ford Performance Racing School driver restarted behind only leader Denny Hamlin for the second attempt at a green-white-checkered finish. As Hamlin drove wide into turn one and cars bunched up on the restart, Briscoe slid off into the grass. Briscoe returned to the track right behind Hamlin and was vying for the lead, but he was penalized for making up his positions by venturing through the grass. After serving his penalties, he was scored 26th and one lap down at the checkered flag.

● Briscoe was the highest finishing NASCAR Cup Series rookie for the 20th time this season.

● Kyle Larson remains the championship leader after Indianapolis with a 22-point advantage over second-place Hamlin.

“There at the (final) restart, everybody is trying to outbrake each other getting into (turn) one, and we all kind of missed it to a certain extent. I was getting run wide and had nowhere else to go. I knew I was going to go through the grass. It was just a matter of do you go through it slow or gas it wide open and hope you get through it. I don’t know if there would have been a penalty if I had gone through it slow, but that was my only chance to win the race at that point. I went for that and stayed on (Denny Hamlin) tight and knew the 16 (AJ Allmendinger) was right behind me. He was on newer tires.

“A lot of guys were getting lazy through that turn and would just swing it out wide and leave the bottom wide open. So I was kind of all over him (Hamlin) in the esses, and when I went to go underneath him, I just clipped him in the right rear. He was already trying to get back to the left, so it just turned him right around. It is unfortunate for them. They were probably going to win the race if the 16 didn’t get to him. For us, we got a penalty, and I don’t even know where we (would have) finished. It is frustrating to be that close. You can taste it and imagine what it would be like, and then it gets taken away. I have a lot to be proud of. I feel like I showed that I belong here and I will get another chance next year.”