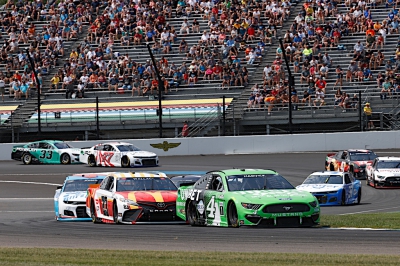 ●  In a largely processional affair, the No. 4 Unibet Ford Mustang maintained its 25th-place starting spot through the first five laps.

●  Made scheduled, green flag pit stop for four tires and fuel on lap 12. Many other drivers did the same.

●  Harvick finished the stage in 31st and stayed out upon its conclusion to gain some track position for the start of stage two.

●  Made scheduled, green flag pit stop for four tires and fuel on lap 32, with other teams making similar calls.

●  “I feel like I lost some of my stopping power, but I think that was due more to grip,” said Harvick at the end of the stage.

●  Harvick finished the stage in 25th and stayed out upon its conclusion to gain some track position for the start of the final stage.

●  Harvick held steady in 15th until green flag pit stops began on lap 51, rising up the leaderboard as those in front of him pitted.

●  Made scheduled, green flag pit stop for four tires and fuel on lap 54, which dropped Harvick to 30th.

●  As pit stops cycled through, Harvick methodically climbed in the running order, rising to 22nd by lap 60.

●  Took advantage of caution and pitted for four tires and fuel. Lined up 32nd for lap-77 restart.

●  Suffered right-side damage trying to avoid a nine-car incident in turn six on lap 79, but was able to continue until race was red-flagged for 19 minutes and 14 seconds for track cleanup.

●  Pitted under caution on lap 80 to make repairs, which included the removal of debris lodged in the right-side door. Pitted again on lap 85 to inspect suspension damage.

●  Lined up 27th for the first attempt at a green-white-checkered finish on lap 89.

●  Harvick avoided a seven-car accident in turn six on the restart and picked up five positions. The race was red-flagged once again, this time for four minutes and eight seconds.

●  Started 23rd for the second attempt at a green-white-checkered finish on lap 94.

●  Harvick picked up nine spots over the final two laps to salvage a 14th-place finish.

●  AJ Allmendinger won the inaugural Verizon 200 at the Brickyard to score his second career NASCAR Cup Series victory and his first of the season. His margin over second-place Ryan Blaney was .929 of a second.

●  Kyle Larson remains the championship leader after Indianapolis with a 22-point advantage over second-place Denny Hamlin.

The next event on the NASCAR Cup Series schedule is the FireKeepers Casino 400 on Sunday, Aug. 22 at Michigan International Speedway in Brooklyn. The race starts at 3 p.m. EDT with live coverage on NBCSN and SiriusXM NASCAR Radio.