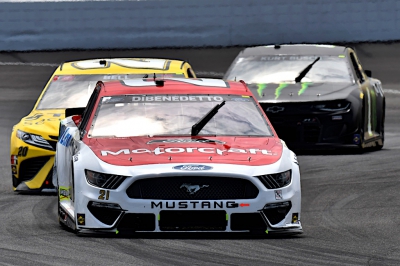 Matt DiBenedetto drove a battered No. 21 Motorcraft/Quick Lane Mustang to a fifth-place finish in a chaotic Verizon 200 on the road course at Indianapolis Motor Speedway. It was his third top-five finish of the season, his sixth top-10 and his fifth-straight finish of 11th or better.

DiBenedetto started Sunday’s inaugural Cup Series run on the road course at Indianapolis Motor Speedway from 15th place. His Motorcraft/Quick Lane Mustang sustained body damage on the start, and he and the team battled to overcome that throughout the race.

Crew chief Jonathan Hassler, who had a stellar day as a race strategist, brought his driver to pit road with three laps remaining in the opening Stage. That set DiBenedetto up to start the second Stage from 14th place.

Just after that restart, DiBenedetto was involved in a fender-banger with Christopher Bell, briefly drove off the track but recovered to rejoin the race in 21st place.

Hassler adopted a different strategy for the end of the second Stage. By staying on track throughout that run, DiBenedetto finished Stage Two in fifth place and earned six Stage points.

As the third and final segment of the race got underway, DiBenedetto, after a pit stop, began working his way forward.

As others ahead of them pitted under the green flag, Hassler left DiBenedetto on the track as long as possible. He took the lead on Lap 63 but yielded to drivers on fresher tires. He was still running seventh when he finally headed to pit road with 11 laps remaining.

As luck would have it – good luck that is - the yellow flag flew with DiBenedetto on pit road. When most of the rest of the field made pit stops under the ensuing caution period, DiBenedetto and the Motorcraft/Quick Lane Mustang cycled up to third place for a restart with six scheduled laps remaining.

Despite the damage to his Mustang, DiBenedetto was running fourth when the caution flag – and eventually the red flag - was displayed for a multi-car crash in Turn Six. The Motorcraft/Quick Lane Mustang received more damage, including to the front suspension, but DiBenedetto stayed on track in fourth place for the first attempt at a green-white-checkered-flag run to the finish.

Then came another multi-car crash in Turn Six.

In the second and final attempt at an overtime finish, DiBenedetto held on to finish fifth.

In his post-race comments, DiBenedetto credited Hassler with putting the team in position to capitalize on the late-race chaos.

“All the credit goes to crew chief Jonathan Hassler for knowing the strategy and the spot we were in and throwing a Hail Mary and running all the way until we were about out of fuel and knowing that if any caution came out we could stay out and get all the track position,”

DiBenedetto said. “This is all him. All I had to do was kind of hang on until the end, hang onto the position.

“Obviously, our car was missing some pieces on it, so I just had to hang on for whatever we could get.

“We actually had a shot at [a win] there at the end. I couldn’t believe it. It’s just a testament to this team.”

DiBenedetto added that he hasn’t given up on putting the No. 21 Mustang in Victory Lane before the season ends.

“We need to keep digging,” he said. “We need to win one of these races.”

Next up for DiBenedetto and the Wood Brothers team is the FireKeepers Casino 400 at Michigan International Speedway on Sunday Aug. 22.