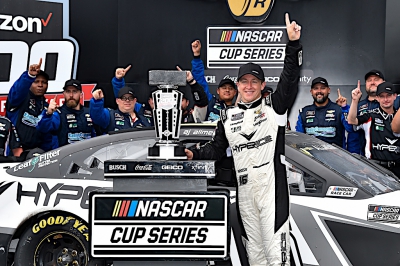 The first NASCAR Cup Series road course race at Indianapolis Motor Speedway was full of drama – for A.J. Allmendinger, who led only the last two laps of overtime to secure his second career NASCAR Cup Series victory Sunday, and for those who fell short of the cherished trophy in an action-packed final few laps.

Denny Hamlin was leading the race on the final restart with two laps to go before being hit from behind by rookie Chase Briscoe in Turn 10, just before Briscoe was supposed to serve a penalty for running off-course earlier in the lap. Instead of winning, Hamlin finished 23rd and Briscoe, 26th.

With those two cars derailed, Allmendinger moved up from third place to take the lead and hold off Ryan Blaney and Kyle Larson by .929-second.

Before the race, Allmendinger shrugged off any suggestions that he shouldn't be considered an odds-on favorite despite his impressive road course background. This season he’s competing fulltime in the NASCAR Xfinity Series for Kaulig Racing and Sunday marked only his fourth NASCAR Cup Series start of the year.

But the former open-wheel star has an Indianapolis 500 start, leading 27 laps in a seventh-place finish in 2013 and this iconic track has long been considered hallowed ground by the 39-year old Californian.

“We just won at Indy, what’s up," Allmendinger yelled toward the grandstands after screaming in excitement on his team radio during his entire victory doughnut celebration in the No. 16 Kaulig Racing Chevrolet at Indianapolis’ famed yard of bricks start/finish line.

“I mean, it was survival of the fittest," Allmendinger said. “We probably had like an eighth, tenth-place car, sped on pit road. I thought we were going to finish 12th to 15th and then those restarts were just insane.

“It’s great when you have a car owner that just says, ‘go get me trophies’. He doesn’t care if that thing is torn up."

As Allmendinger was in the midst of his victory celebration, Hamlin walked through the smoke, down Indianapolis pit road to find Briscoe and discuss the incident.

“I agree it’s not on purpose, but my team told me he had a penalty right away and to me, it’s obvious. If you cut the race track and end up in the lead, you’re going to have a penalty.

“Lack of awareness. Race me for a lap. He went right in the back of me. We can’t race that way. I don’t think he did it maliciously. I’ve raced with him for a year now and he’s not that kind of person. Just bad judgement."

“I can accept it [Briscoe’s explanation to him]," Hamlin continued. “The roles have been reversed a couple times, I mean I’ve been doing this a long time and I’ve been on the giving end of mistakes, so I get it. To me, it’s just a lack of situational awareness. Obviously, you’re going to get a penalty if you go off the race track like he did. I’m not like, furious, it just sucks.”

For his part, Briscoe acknowledged his part of the incident but insisted he did not intentionally wreck Hamlin. He said he was glad to try and sort things out after the race.

“I explained to him that I didn’t even know I had a penalty until I got to Turn 10," Briscoe said. “If I knew I had a penalty, there was no need for me to even try to pass him for the win. If I would have known that earlier, I would have done my stop-and-go and went on. As I understand it, at the moment in time I could still win the race and I was going for it and got into him accidentally.

“I think at the end [in discussing it) he kind of started to understand. He has been there when you are trying to get your first win and especially in our Playoff situation, you have to do what you have to do.

“I’m sorry it ruined his day, that was never my intention," Briscoe continued. “I don’t want to wreck anyone for the win. I’ve never done that in my life."

After winning seven races last season, Hamlin is winless in 2021 with only two races remaining. And his 23rd-place finish cost him the championship points lead he’d held since the second race of the year in February. Briscoe was trying to win his first career NASCAR Cup Series race which is essentially the only thing that could put him in the Playoffs at this point as he is ranked

Larson’s third place run was good enough to move the five-race winner atop the standings, but Hamlin still secured a Playoff berth.

A pileup on the first overtime restart forced the double overtime period with six cars – including the two Richard Childress Racing cars vying for the final Playoff position - collected and eliminated as they negotiated a tricky Turn 5-6 combination with curbing issues that troubled the competitors all day.

With 11 laps to go, it appeared Larson would be picking up his fourth road course victory of the year as he held a commanding 4-second lead on the field. But a debris caution came out forcing the team’s hand in pitting or gambling on a better restart position.

All but five cars pitted. Hamlin stayed out to take the lead in front of Kurt Busch, Matt DiBenedetto, Ryan Newman and Briscoe.

Larson led the pit parade in for tires and came out first - sixth position on track; followed by his Hendrick Motorsports teammate William Byron and Joe Gibbs Racing’s Kyle Busch and Martin Truex, who filled out the top 10 for the restart with six laps remaining.

With a highly-motivated Hamlin out front – still looking for his first victory of the season after winning seven times last year – he fought off Briscoe to hold the lead on older tires. Battling furiously for position just behind them, a nine-car accident in Turns 5-6 brought out a red flag as NASCAR officials spent nearly 20 minutes actually removing some of the curbing that contributed to the melee.

The incident involved nine cars, eliminating frontrunners William Byron, Joey Logano, Daniel Suarez and Christopher Bell. Byron, had been in the top five when he hit the curbing. Just behind him Martin Truex Jr. spun then Logano and then Suarez.

“Wild is not a crazy enough term for what that was," DiBenedetto said of the afternoon.

With two races remaining to set the 16-driver Playoff field, the NASCAR Cup Series races returns to the big oval next in the FireKeepers Casino 400 at Michigan International Speedway (3 p.m. ET on NBCSN, MRN and SiriusXM NASCAR Radio).