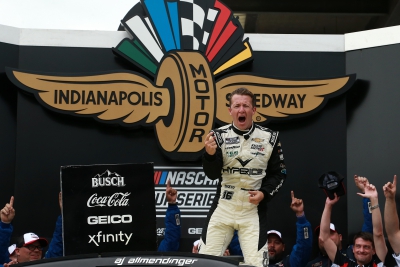 A.J. Allmendinger won the inaugural race on the Indianapolis Motor Speedway road course on Sunday. The driver of the No. 16 Kaulig Racing Chevy notched his second career victory -- and first since 2014 at Watkins Glen -- while also marking the first Cup Series victory for an organization making the jump to full-time competition at NASCAR's highest level next season.

"This is unbelievable, never in my wildest dreams could I have imagined the way that just played out," Allmendinger said on the NBCSN telecast. "(Team Owner) Matt Kaulig -- he's almost in tears. (Team President) Chris Rice, the Hyperice Chevy, it was so good ... those restarts were just insane. It's great when you have a car owner that just says 'go get me trophies.'"

Allmendinger overcame an early pit road speeding penalty and led only the final two laps after a chaotic turn of events during the latter portion of the race. A caution for debris on lap 73 -- which erased Kyle Larson's mammoth lead over Hendrick teammate Chase Elliott -- brought most everyone to pit lane, while Denny Hamlin, Kurt Busch, Matt DiBenedetto and Indiana-native Chase Briscoe all stayed on the race track.

The ensuing restart saw Joe Gibbs Racing driver Martin Truex Jr. go for a spin in turn six, a troublesome spot for many drivers throughout the day. No caution was thrown, but debris from a piece of curbing littered the race track, causing a massive mêlée on the following lap.

William Byron, driver of the No. 24 Hendrick Motorsports Chevrolet, tore the splitter off his car and spun through the grass on lap 78 as a result of hitting the treacherous curb, collecting 10 cars in total -- including many inside the top-10.

Team Penske driver Joey Logano pounded the inside tire barrier, but walked away under his own power. The red flag was displayed for 19 minutes, allowing track workers to remove the curbing and clean the racing surface.

But the action was far from over.

After running 10 caution laps, the field restarted on lap 89, only to suffer a similar fate in turn six -- this time seven cars were collected in an accident.

Among them were Richard Childress Racing teammates Austin Dillon and Tyler Reddick, who are battling for the 16th and final Playoff spot. Reddick -- the winner of both stages -- finished 21st, while Dillon was relegated to a 31st-place finish. Ultimately, Reddick gained 13 points on his teammate on the day, giving him a 28-point advantage with two races remaining in the regular season.

This time, the red flag was displayed for four minutes before the field took the green flag for its second Overtime attempt on lap 94. On the restart, Hamlin and Briscoe hoped to out-brake each other getting into turn one, but Hamlin pushed wide and caused Briscoe to drive through the grass. Because he took a shortcut, Briscoe was penalized, but not before he spun Hamlin from the lead, ruining both of their days.

Hamlin, though, accepted the apology from Briscoe:

"I agree, it's not on purpose (the penalty confusion), but my team told me that he had a penalty right-away," said Hamlin, who lost the points lead to Larson. "To me, it's obvious -- if you cut the race track and you end-up in the lead, you're going to have a penalty, so, lack of awareness. And then, just race me for a lap. He (Briscoe) just ran right into the back of me. We can't race that way."

Briscoe, who led 13 laps on the day after qualifying second, shared his perspective:

"I don't think he (Hamlin) realized -- I didn't even know I had a penalty until I got to turn 10," said Briscoe. " ... I felt like that was my best opportunity to win the race if I could get under him there, and I knew A.J. (Allmendinger) was going to be quick either way, so I had to try to get going when I could, and I'm sorry that it ruined his day."

Byron earned the seventh pole of his career during qualifying Sunday morning, his third on a road course; he finished 33rd.

The NASCAR Cup Series returns to action next Sunday with the FireKeepers Casino 400 at Michigan International Speedway. The penultimate race of the regular season will air on NBCSN, with coverage beginning at 3:00 p.m. ET.

My name is Jason, and I am from Binghamton, N.Y. I am currently pursuing a journalism degree from Buffalo State College, and it is my goal to work in the NASCAR media world. Sports are my passion, and watching/attending sporting events is what I do most in my free time.
https://twitter.com/jasonpguth