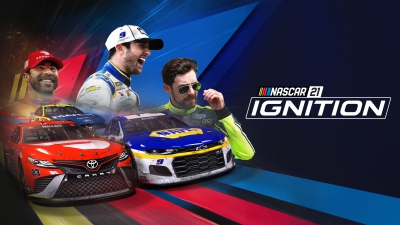 Motorsport Games Inc. (NASDAQ: MSGM) (“Motorsport Games”), a leading racing game developer, publisher and esports ecosystem provider of official motorsport racing series throughout the world, today announced the release date of NASCAR 21: Ignition. The newest installment in the officially licensed NASCAR gaming franchise will launch on October 28, 2021, with pre-orders starting on August 12, 2021, for Sony PlayStation 4, Microsoft Xbox One and PC through the Steam store. A first look at the NASCAR 21: Ignition trailer can be seen here.

Games will have a free upgrade path for the Sony PlayStation 5 and Microsoft Xbox Series X/S post-launch, with free downloadable upgrades available for other users as well. Digital gamers who pre-order NASCAR 21: Ignition Standard or Champions Edition will be given early access to the game two days in advance and a “Traxion.gg” paint scheme. Players who purchase the Champions Edition will also receive exclusive availability to unlock Bill Elliott as a playable character, his paint schemes, in-game career boost and the season pass, which will include all three DLC packs. The season pass will release additional paint schemes and three other NASCAR legend drivers.

“Motorsport Games is thrilled to offer our most true-to-life simulation of NASCAR to date with NASCAR 21: Ignition,” said Dmitry Kozko, CEO of Motorsport Games. “We’ve designed this game with our fans and players in mind, bringing them features, modes and options they have long clamored for. NASCAR 21: Ignition captures the atmosphere, pageantry and fierce competition of the NASCAR Cup Series, while offering authenticity, competition and accessibility through the game’s core foundations.”

NASCAR 21: Ignition will be developed and published by Motorsport Games. The simulation will be powered by Unreal Engine and Studio 397’s highly-acclaimed rFactor physics engine, giving users a more authentic driving experience, immersive gameplay, dynamic AI and stunning visuals. The game will come complete with official drivers, teams and tracks from the 2021 NASCAR Cup Series, including broadcast quality pre-race build up and post-race replays. All broadcast voice-over work will be provided by MRN Radio, the Voice of NASCAR. Drivers will be face-scanned into the game to provide their realistic representations, with heightened attention to detail regarding tracks, grandstands and pit experiences.

With NASCAR 21: Ignition, Motorsport Games will provide fans with a bevy of new features and updates long anticipated by its player base. Players will have the ability to dive straight into the action with Race Now, competing as their favorite official driver from the Cup Series, or starting in the engaging career mode as they build their reputation in the sport and battle their way towards the championship. Career mode, which provides each user with driver-focused progression, with clear goals and structures on the road to glory. Online races will be supported for up to 40 players – a full NASCAR race grid – allowing friends and other players to battle from around the world.

“Our partners at Motorsports Games have dedicated an incredible amount of talent and resources towards completely redeveloping the game and delivering a product that our fans will be excited to play,” said Nick Rend, Managing Director, Gaming and Esports at NASCAR. “NASCAR 21: Ignition utilizes Epic’s Unreal Engine to bring the most realistic NASCAR race experience directly into the home of our fans, while introducing NASCAR-style racing to a broad audience of gamers.”