Indy Road Course up Next for DiBenedetto, Motorcraft/Quick Lane Team 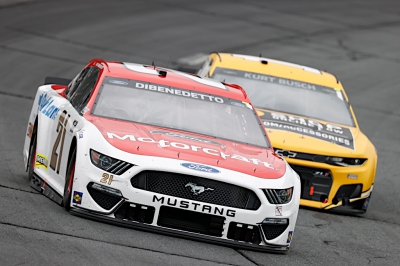 After finishes of 10th and 11th in their two most recent road course races, Matt DiBenedetto and the No. 21 Motorcraft/Quick Lane team are hoping for another strong finish in Sunday’s inaugural Verizon 200 on the road course at Indianapolis Motor Speedway.

Although it will be the first appearance for the Cup Series on the 2.439-mile, 14-turn track inside the historic Speedway, it won’t be DiBenedetto’s first go at the layout.

“I got to be the first one to drive a stock car on the Indy road course when I tested the Xfinity Series car there [in January, 2020] which was cool,” he said. “So I have some experience there.”

As has been the case this year when the Cup Series visits a new venue, there will be a practice session prior to the race and a qualifying round to set the starting field.

DiBenedetto said the practice is important, as changes to the car are limited once the green flag flies. Last week at Watkins Glen, where there was no practice, he said he believed the team could have improved on its 11th-place finish had they had a chance to run some laps beforehand.

Even so, the team was close to backing up its 10th place finish at Road America, where there was a practice session prior to the race.

That finish at Road America was the start of a four-race stretch of finishes of 11th or better that the team will carry into this weekend’s race at Indianapolis, where the Cup Series raced on the 2.5-mile oval track from 1994 to 2020 but now will run the road course.

“We have been making gains on the road courses, and we as a team have a lot of consistency on our side,” DiBenedetto said.

The 82-lap race is scheduled to get the green flag just after 1 p.m., with TV coverage on NBC.