Kyle Busch Indy with a 'Twist' 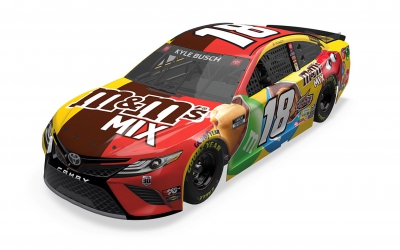 Kyle Busch, the two-time Brickyard 400 winner in his 17th season in the NASCAR Cup Series, will be relegated from veteran to rookie status, of sorts, for Sunday’s Verizon 200 at Indianapolis Motor Speedway.

Busch won back-to-back Brickyard 400s in 2015 and 2016 among his five top-five finishes and 12 top-10s in 16 career starts on the historic 2.5-mile oval, but when the series makes its return this weekend, competitors will literally experience a twist on tradition as they’ll race on the facility’s 2.534-mile, 13-turn road course for the first time.

Busch, driver of the No. 18 M&M’s MIX Toyota Camry for Joe Gibbs Racing (JGR), has fared well on both of the previous two new road-course events added to this year’s schedule. He led 12 laps with a top-10 finish in May at the Circuit of Americas in Austin, and he finished third July 4 weekend at Road America in Elkhart Lake, Wisconsin.

With Busch’s proficiency on the road courses, there’s no doubt he’ll be a contender this weekend in his first shot at the Indianapolis circuit. In the five road-course races contested so far this year, Busch has three top-fives and four top-10s, including the third-place finish at Road America and a fourth-place run last weekend at Watkins Glen (N.Y.) International.

So as Busch heads to the Indianapolis road course for the first time, he’ll hope that Indy with a twist will be just a successful as the historic oval as he looks to add to the win column Sunday in his M&M’S MIX Camry.