DiBenedetto Finishes 11th at the Glen 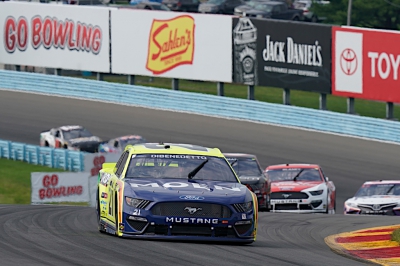 Matt DiBenedetto and the No. 21 Menards/Moen team continued their string of strong performances with an 11th-place finish in Sunday’s Go Bowling at the Glen at historic Watkins Glen International. It was their fourth-straight finish of 11th or better, including a 10th-place finish at Road America, a ninth at Atlanta Motor Speedway and an 11th at New Hampshire Motor Speedway.

DiBenedetto and the Menards/Moen Mustang lined up 14th for the start of Sunday’s 90-lap run on the historic road course in New York.

DiBenedetto had moved up to 12th place by Lap 12 when the yellow flag was displayed for the Competition Caution. He was running 13th just prior to the end of the first 20-Lap Stage when he made a green-flag pit stop. That took him out of the running for Stage points in the first segment but gave him track position at the start of the second Stage.

He lined up 11th for the restart, moved up to sixth at one point then closed out that Stage in seventh place, earning four Stage points.

In the third and final segment of the race, which was completed without a caution flag, he ran inside the top 10 before making his final pit stop, under the green flag at Lap 58. DiBenedetto worked his way back to 11th and was running there when the checkered flag fell.

He told reporters afterward that he thought his Menards/Moen Mustang was capable of a bit more.

“I think we were an eighth- to 10th-place car,” he said. “We probably finished a couple spots further back than what we could have gotten.

“We caught that whole group of cars at the end and just ran out of time.”

DiBenedetto said his No. 21 team, led by crew chief Jonathan Hassler, turned in a solid effort.

“We were lacking a little bit of speed, but it was a good day. I thought we maximized,” he said. “We made good adjustments.

“Hassler made the perfect adjustment there at the end, and it was as good as our car was going to be without practice.

“There were things I wanted to change, but you can’t when you don’t have practice.”

DiBenedetto remains 17th in the Cup Series standings and 19th in the Playoff standings, and will need a race victory in one of the three remaining regular season races to make the cut for the Playoffs.

Next up for DiBenedetto and the Wood Brothers team is another road-course race, the Verizon 200 next Sunday on the infield road course at Indianapolis Motor Speedway.