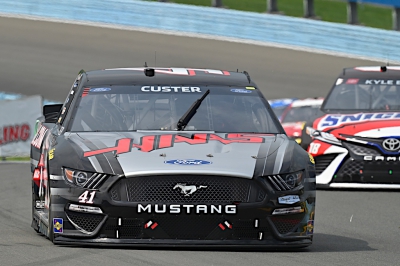 ● The HaasTooling.com Ford driver held his relative position during the opening run, picking up one spot on his way to the lap-10 competition caution. He said his biggest issue in the early going was wheel hop heading into the fast, right-hand turn one. He stayed on track and restarted 16th when the race went back to green on lap 12.

● Custer reported his racecar was “still a little loose” at the top of the esses and the wheel hop issue into turn one persisted, as well as in turn six. He pitted three laps before the end of the stage from 19th place. After taking fuel and four tires with an air-pressure adjustment all around, Custer resumed 32nd, where he finished the stage. He stayed on track during the break.

● The HaasTooling.com driver reported his racecar was not too tight. He stayed on track during a lap-24 caution for a stopped car on track.

● Custer asked for help turning in both direction on his next pit stop, as well as help with a brake lockup issue. He stayed on track all the way to the end of the stage and finished it 14th. He pitted during the break for four tires, fuel and adjustments, and then was penalized for passing through too many pitboxes on exit.

● The HaasTooling.com driver again held his relative position during the early laps of the stage, saying the changes made during the stage break were “definitely a gain, and we need more of that.” He was up to 28th on lap 52 when teams began making their final scheduled pit stops, was 12th by lap 58 and cracked the top-10 the next lap.

● Custer was up to fourth place when he was called to the pits under green on lap 62. He took four tires, fuel and adjustments and resumed in 27th.

● Custer methodically made his way forward and cracked the top-20 by lap 73. He picked up a pair of positions by the time he took the checkered flag.

●  Kyle Larson won the Go Bowling at The Glen to score his 11th career NASCAR Cup Series victory, his series-leading fifth of the season and his first at Watkins Glen. His margin over second-place Chase Elliott was 2.430 seconds.

●  There were four caution periods for a total of six laps.

●  Twenty-four of the 37 drivers in the Go Bowling at The Glen finished on the lead lap.

●  Larson and Denny Hamlin are tied for the championship lead after Watkins Glen with each having 917 points. Their margin over nearest pursuer William Byron is 131 points.

“Our HaasTooling.com Ford was solid at the end of the race, and I have to thank Mike Shiplett and the guys for that. We had some work to do with a few issues involving wheel hop and brack lockup early in the race, but we made the right adjustments there at the end. The penalty on pit road didn’t help our cause, but we were able to rally back for a top-20. We’ll stay in road-race mode for another week and see what we can do at Indy next week.”