Harvick Snares Another Top-10 at The Glen 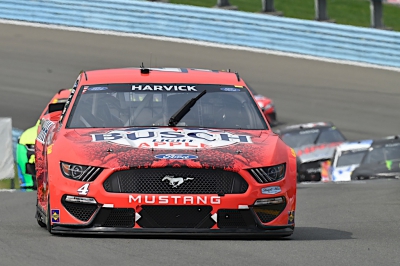 ●  Dropped to ninth by the third tour around the seven-turn, 2.45-mile road course, but held steady in that spot through competition caution on lap 10.

●  Crew chief Rodney Childers opted to keep Harvick out on the racetrack and maintain track position instead of pitting.

●  Harvick lined up eighth for lap-13 restart and was back in ninth when the field came back around for lap 14.

●  Made scheduled, green flag pit stop for four tires and fuel on lap 17, allowing Harvick to stay out after the stage ended.

●  Maintained fourth place through caution on lap 25 and remained in that spot for lap-28 restart.

●  Harvick drove the No. 4 Busch Light Apple Ford Mustang into second place going into turn one of the restart.

●  Christopher Bell got by Harvick in the Bus Stop section of the track to take second.

●  Harvick stayed comfortably in third through the end of the stage.

●  Stayed out at the end of the stage to maintain track position.

●  Kyle Larson passed Harvick on the final corner of lap 44 to take third, and then Ross Chastain got by Harvick in turn one on lap 45 to take fourth. The No. 4 Busch Light Apple Ford Mustang settled into fifth with Harvick’s Stewart-Haas Racing teammate Chase Briscoe behind him in sixth.

●  Made scheduled, green flag pit stop for four tires and fuel on lap 55.

●  Bell passed Harvick on lap 74 to take seventh and Harvick settled into eighth.

●  Chastain got by on lap 88 to take eighth, but as Chastain’s fuel cell ran dry in the final lap, Harvick retook the position to finish eighth.

●  This was Harvick’s third straight top-10 at Watkins Glen.

●  This was Harvick’s second straight top-10. He finished sixth in the series’ prior race July 18 at New Hampshire Motor Speedway in Loudon.

●  Harvick’s 11 top-10s at Watkins Glen are the second most among active NASCAR Cup Series drivers.

●  Kyle Larson won the Go Bowling at The Glen to score his 11th career NASCAR Cup Series victory, his series-leading fifth of the season and his first at Watkins Glen. His margin over second-place Chase Elliott was 2.430 seconds.

●  There were four caution periods for a total of six laps.

●  Twenty-four of the 37 drivers in the Go Bowling at The Glen finished on the lead lap.

●  Larson and Denny Hamlin are tied for the championship lead after Watkins Glen with each having 917 points. Their margin over nearest pursuer William Byron is 131 points.

“Our Busch Light Apple Ford was decent today. We just had to go into fuel mileage savings as soon as we came in the pits that last run, and just kind of ran our pace and finished where we finished because we couldn’t afford to run out of gas. So, they did a good job and had a good strategy. We scored a few stage points and had a solid finish, so we’ll go to the next one.”

The next event on the NASCAR Cup Series schedule is the Verizon 200 at the Brickyard on Sunday, Aug. 15 on the road course at Indianapolis Motor Speedway. The race starts at 1 p.m. EDT with live coverage provided by NBC and SiriusXM NASCAR Radio.