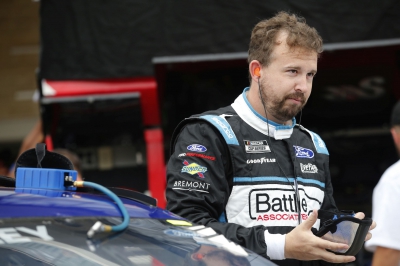 Two weekends in a row of back-to-back seat time behind the wheel of a racecar is not unheard of for a typical racecar driver, but it’s not as easy as it sounds, or as easy as British racing driver and Rolex 24 winner Kyle Tilley, makes it look. Behind every competitive racecar driver is an exceptional trainer who helps them prepare for their demanding schedule, and that’s exactly the goal of physiotherapist and President of PitFit Training, Jim Leo.

On August seventh and eighth, Tilley will get behind the wheel of a NASCAR race car for two days in a row at Watkins Glen International, competing in both the NASCAR Xfinity and Cup Series for a combined 421.4 miles of intense racing in a short span of 24 hours! The following week, he will do the weekend doubleheader all over again on top of practice and qualifying sessions at the Indianapolis Motor Speedway Road Course.

With an intense and busy schedule as the one Tilley has, how does a competitive race car driver who aims to perform at his highest level and achieve his best results, factor in the potential threats he could face including heat exhaustion and dehydration affecting his focus, and keeping up the overall energy it takes to race in NASCAR two days in a row, for two weeks in a row? The answers come from his physiotherapist and trainer, Jim Leo, President of PitFit training.

Born in the heart of motorsports in Indianapolis, Indiana, Jim Leo gave creation to PitFit Training in 1993 when he sought after a way to better the fitness of Roger Penske’s CART Indycar team. From improving team pit stops to increasing overall wellness of drivers and team members, PitFit Training quickly became Leo’s center of attention as overtime, he developed an incredibly rigid and focused training and nutrition program for drivers of a variety of series in motorsports, including Indycar, IMSA, NASCAR, NHRA, and more.

For a competitive racecar driver such as Kyle Tilley, entering Jim Leo’s motorsports-specific human performance training was a no-brainer.

“Working with Jim, Alex, Kinsey and Isaac at PitFit Training has pushed me to perform at a higher level,” said Kyle Tilley. “Without Jim’s support and guidance, big races would be a bit more difficult. Working with him for me, it’s the difference between winning and coming second.”

After considering the endurance and stamina that will be required by Kyle Tilley’s demanding schedule, Leo put together a detailed plan to ensure that Tilley is both physically and mentally prepared as possible for what’s to come in his NASCAR weekends. To make sure Tilley is physically and mentally prepared for the demands of racing both the NASCAR Xfinity and NASCAR Cup Series races, Leo designed the plan to focus on several key areas.

The first area to tackle is hydration.  In conjunction with Infinit Nutrition, Tilley will follow a strict hydration plan using two blends depending on what time of day it is. “The goal is to minimize dehydration by no more than 2-3% of total body weight if possible to minimize the performance declines of dehydration one the body, specifically loss of concentration,” said President Jim Leo. “Kyle will also be weighed before and after each session to determine how much fluid he needs replaced.”

The next factor to consider for back-to-back weekends of doubleheader racing in a stock car is heat training and the ability to battle the effects of the hot conditions in the racecar. According to Weather.com, the average temperature for both Watkins Glen, NY and Indianapolis, Indiana in the month of August is 83 degrees Fahrenheit. The heat in conjunction with over 200 miles of racing for two days in a row is not something to be underestimated, and Leo made note of this as soon as he heard about Tilley’s doubleheader schedule. “Kyle has been doing 30–40-minute post-workout sessions in our Infrared Sauna, while simultaneously doing brain training drills with the SOMA NPT app. on his phone to increase his endurance and consistency in the heat,” said Leo.

"I have worked with Kyle for several years during race weekends, from sprint races to 24-hour endurance events,” said President and physiotherapist Jim Leo of PitFit Training. “We have a good routine together that he believes in because it’s worked. That gives him confidence that he will be able to handle whatever type of racing he participates in on a given race weekend”

In addition to post-race session weigh-ins for his hydration plan, Tilley will also go through various methods of recovery after competing, including soft tissue work, cupping, kinesiology tape, and even use of the Hypervolt gun in between sessions to decrease fatigue of tired tissue in the body.

The intensity and focus that is required of a driver who’s schedule never really stops, it is undeniable that the help of a physiotherapist is crucial for a driver who wants to not only see results but through thinking ahead and planning around the potential factors that could affect his results. Working with Jim Leo and the rest of the professionals at PitFit Training is not only a resource to better prepare Kyle Tilley for his demanding racecar schedule, but also a means of enhancing his physical and mental well being as he navigates his motorsport career.