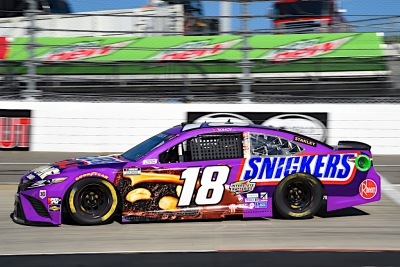 As the NASCAR Cup Series heads to Watkins Glen (N.Y.) for Sunday’s Go Bowling at the Glen, there’s more than one reason to welcome back NASCAR’s top series to Upstate New York.

The series will return to action Sunday after a two-week summer hiatus while its television partner, the NBC family of networks, has been immersed in coverage of the 2020 Tokyo Olympics. The historic road course at Watkins Glen will also host NASCAR for the first time in two years as last year’s scheduled race there was not held because of the COVID-19 pandemic.

Sunday’s race on the 2.45-mile, seven-turn road course will be the fifth of seven road-course events on the schedule this season.

For Kyle Busch, driver of the No. 18 SNICKERS Toyota Camry for Joe Gibbs Racing (JGR), Watkins Glen is one of his favorite road courses on the schedule, as he has brought home two victories, six top-five finishes, and 12 top-10s in 15 starts there.

After Busch’s inaugural Cup Series victory at The Glen in 2008, he nearly won for the second time in his 2011 and 2012 visits there before breaking through again in 2013. A third career victory Sunday in New York’s scenic Finger Lakes Region would continue to solidify Busch and the SNICKERS team as a contender each time the series comes to town.

As far as overall road-course proficiency, Busch is tied with David Pearson and Mark Martin with four Cup Series road-course wins apiece. That’s some pretty good company, already. But with a fifth road-course win, he could tie Darrell Waltrip, Tim Richmond and Dan Gurney on the road-course win list. The top three in all-time road-course wins in the Cup Series includes Chase Elliott and Jeff Gordon with seven apiece, while Tony Stewart is the all-time leader with nine wins.

So as Busch heads to Upstate New York for some road racing this weekend in his SNICKERS Camry, he would like nothing more than to welcome Watkins Glen back to the schedule with a third win there, which would be a timely victory with only four regular-season races remaining before the 2021 NASCAR Cup Series playoffs begin on Labor Day weekend.