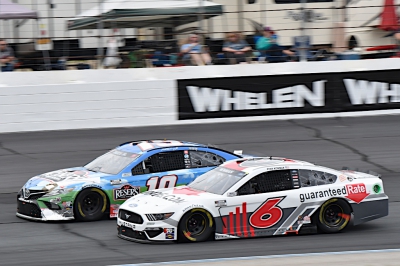 A wild afternoon of challenging weather conditions in New Hampshire culminated in a shortened race due to darkness, where Ryan Newman finished 24th in the Guaranteed Rate Ford.

A steady mist persisted around the track throughout the morning hours in Loudon, letting up just after lunch to allow the race to start on time. But, just five laps in, heavy rain fell which brought the red out after several cars went spinning in the opening turns.

The red flag lasted just under two hours, putting NASCAR in an interesting position with no lights at the facility. Newman used the early opportunity to hit pit road after the delay, and ended up 25th at the end of the first stage through 75 laps.

He fired off 27th for the second segment, but fought his way inside the top-20 to 18th by lap 185 when the second stage flag flew. He fired off the final stage in the same position, but faded back to 24th as the laps and daylight wound down, ultimately ending the race nine laps short of the scheduled distance.

NASCAR will take two weeks off for the Olympic break, and return to action next at Watkins Glen on August 8. Race coverage there is set for 3 p.m. ET on NBCSN, and can also be heard on MRN and SiriusXM Channel 90.