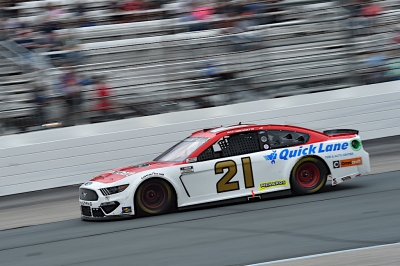 Matt DiBenedetto and the No. 21 Motorcraft/Quick Lane team came up short in their gamble to win Sunday’s Foxwoods Resort Casino 301 at New Hampshire Motor Speedway but still scored an 11th-place finish. It was the team’s third-straight finish of 11th or better, coming after a 10th-place finish at Road America and a ninth at Atlanta.

DiBenedetto started 14th in Sunday’s race and was running 12th when rains halted the show after just seven green-flag laps.

DiBenedetto ran just outside the top 10 for most of the second Stage and finished that segment in 12th place.

The third and final Stage of the race saw drivers and race teams making their strategy plans to maximize their opportunities in the event the race was cut short because of darkness. There are no lights at New Hampshire and the long red-flag period meant the race likely wouldn’t run to the advertised distance.

And the length of that segment of the race meant that no one could run to the finish without making a pit stop for fuel. NASCAR advised teams that if the race would be shortened, they would get a notice when there were 10 laps left to run.

DiBenedetto had worked his way up to ninth place when the leaders began making green-flag pit stops at Lap 250 of the scheduled 301.

Crew chief Jonathan Hassler elected to leave DiBenedetto on the track, hoping for some yellow-flag laps that would have slowed the pace and potentially ended the race before he had to pit.

DiBenedetto took the lead on Lap 254 and held it for 20 laps but no caution flags flew, so he steered the Motorcraft/Quick Lane Mustang to pit road for a splash of fuel and two fresh tires.

He rejoined the race in 14th place and worked his way back to 11th when darkness ended the race eight laps shy of the advertised distance.

DiBenedetto was upbeat afterwards, saying Sunday was another day to brag on the Motorcraft/Quick Lane team.

“We were a little off on handling to start with and had to crank on it some,” he said. “We made some good adjustments and would have had another top-10.”

He said that if the team hadn’t gambled and run long on their final stop he believes he would have finished eighth, but he supported the decision to try for a race victory.

“It was a fair trade-off on the gamble,” he said. “And the decision to take two tires (on the final stop) was a great call.”

NASCAR is taking a two-week break during the Olympics before returning to action on Aug. 8 at Watkins Glen.

DiBenedetto, who is 17th in the points standings with four races left in the regular season, said he’s glad to be on a roll heading into the off weeks.