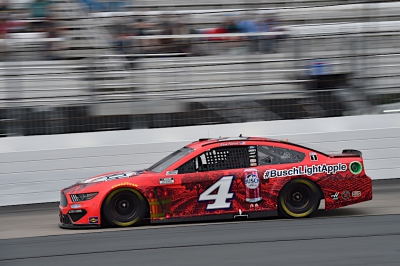 ●  Lined up eighth for lap-24 restart, but dropped to 10th by the time the second caution came out on lap 32 for a single-car spin.

●  Was seventh for lap-39 restart as some drivers chose to pit during the previous caution.

●  Harvick put the No. 4 Busch Light Apple Ford Mustang into the top-five by lap 41.

●  “Could use a little bit of rear grip. Take some tape off it (the grille) too,” said Harvick at the end of the stage.

●  Pitted for four tires and fuel at the conclusion of stage. Made some tire pressure adjustments and removed tape from grille. Quick pit work gained Harvick three spots, positioning him in first place for the start of the second stage.

●  Harvick positioned his No. 4 Busch Light Apple Ford Mustang in the outside lane for the restart and got a great jump on second-place Denny Hamlin.

●  Caution on lap 128 ended a 45-lap green flag run where Harvick was the sole leader.

●  Crew chief Rodney Childers took advantage of the caution and brought Harvick to pit road for four tires, fuel and a track bar adjustment on lap 131.

●  The No. 4 Busch Light Apple team kept Harvick in front, getting him off pit road in first place.

●  Harvick chose the outside lane for the lap-136 restart and got another good jump on second-place Hamlin.

●  Caution on lap 139 for a two-car spin off the backstretch. Harvick and Childers opted to stay out and keep their first-place standing.

●  Race went back to green on lap 145 with Harvick again choosing the outside lane and getting the jump on second-place Hamlin.

●  Brad Keselowski passed Harvick for the lead on lap 147.

●  “Struggling with the back (of the car) taking off the first 20 laps,” said Harvick while holding steady in second on lap 177.

●  Maintained second through the end of the stage and pitted for four tires, fuel and a track bar adjustment at the conclusion of the stage.

●  Harvick again positioned the No. 4 Busch Light Apple Ford Mustang in the outside lane for the restart.

●  As Team Penske teammates Keselowski and Ryan Blaney battled for the lead, Harvick inched ever closer to the duo.

●  After initially gaining on second-place Keselowski, Harvick started falling back a bit, with his Stewart-Haas Racing (SHR) teammate Aric Almirola taking third from him on lap 218.

●  “Still just lacking rear grip,” said Harvick while in fourth place on lap 219. “And I’ve lost my turn-in the middle of the corner.”

●  Harvick made a scheduled, green flag pit stop on lap 250 for four tires and fuel.

●  After pit stops cycled through by lap 275. Harvick was fifth.

●  Harvick held steady in sixth through the finish.

●  Harvick’s 22 top-10s at New Hampshire are the most among active NASCAR Cup Series drivers.

●  This was Harvick’s fourth straight top-10 at New Hampshire.

●  Harvick led twice for a race-high 66 laps to increase his laps led total at New Hampshire to 831.

●  Almirola won the Foxwoods Resort Casino 301 to score his third career NASCAR Cup Series victory, his first of the season and his first at New Hampshire. His margin over second-place Christopher Bell was .697 of a second.

●  This was Ford’s fourth straight win at New Hampshire and SHR is responsible for three of them. (Harvick won in July 2018 and July 2019.)

●  Hamlin remains the championship leader after New Hampshire with a 13-point advantage over second-place Kyle Larson.