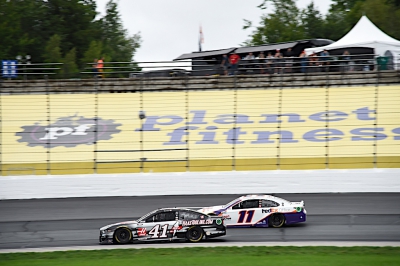 ● Custer struggled with the balance of his racecar in the initial laps of the race before the caution flag flew on lap five.

● The Foxwoods Resort Casino 301 came to an abrupt pause after only eight laps due to rain. The HaasTooling.com Ford driver was running 20th when the red flag waved.

● After an hour and 41 minutes under the red flag, the race resumed under the competition caution. The No. 41 HaasTooling.com team opted to keep their driver out on the track during the caution laps with the leaders to restart 19th.

● The green flag waved on lap 24, and Custer moved up several spots before the lap-32 caution. The 22-year-old reported that his Ford Mustang was tight, but he opted to stay out on the track to try and gain position.

● As the stage progressed, the No. 41 HaasTooling.com Ford Mustang became tighter, causing Custer to fall back to 16th – where he finished the first stage.

● During the stage break, the No. 41 team brought their driver down pit road for four tires, fuel and an air pressure adjustment.

● When the caution came out on lap 127, the No. 41 team brought Custer down pit road for four tires, fuel and an adjustment to combat his tight racecar. The pit crew gained their driver two spots for the restart.

● On lap 160 after falling back to 16th, Custer tried to mimick the line of his teammate Kevin Harvick, but he reported that he got too tight trying to run it.

● In the closing 20 laps of the stage, Custer found his momentum and passed several cars to finish 14th.

● The No. 41 HaasTooling.com team pitted for four tires, fuel and an air pressure adjustment during the stage break.

● On the lap-193 restart, the HaasTooling.com Ford driver passed three cars to pull to 11th in the opening laps of the stage.

● As the final stage progressed, Custer reported that his No. 41 Ford Mustang needed more rear grip, and he fell back to 14th.

● Custer reported on lap 273 that he needed more turn and that he was continuing to run tight.

● On lap 284, NASCAR announced that the race would end in 10 laps due to the darkness. Custer was running 15th.

● The HaasTooling.com driver gained another spot in the closing laps to finish 14th.

● Custer earned his fifth top-15 of the season and his second top-15 in two career NASCAR Cup Series starts at New Hampshire.

● Custer finished eighth in his prior visit to New Hampshire last August.

● Aric Almirola won the Foxwoods Resort Casino 301 to score his first win of the season, the third of his career and his second since joining SHR in 2018. His margin over second-place Christopher Bell was .697 of a second.

● There were six caution periods for a total of 47 laps.

● Only 15 of the 37 drivers in the Foxwoods Resort Casino 301 finished on the lead lap.

“It wasn’t out best day but it was a solid day for our HaasTooling.com team New Hampshire and something we can build on. It’s really cool to see Aric (Almirola) get the win and shows that as an organization we’re moving in the right direction. We’ll take this two-week break and head to Watkins Glen looking for another chance to make some gains.”

The NASCAR Cup Series goes on a two-week summer break as broadcast partner NBC covers the Summer Olympics in Tokyo. It returns to action on Aug. 8 with the Go Bowling at The Glen road-course race at Watkins Glen (N.Y.) International. The event starts at 3 p.m. EDT with live coverage provided by NBCSN and SiriusXM NASCAR Radio.