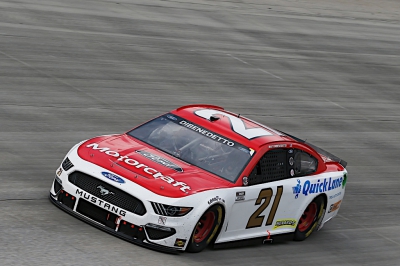 With their mid-season slump starting to look like a thing of the past, Matt DiBenedetto and the No. 21 Motorcraft/Quick Lane team are headed to New Hampshire Motor Speedway hoping to post their third top-10 finish this month, and DiBenedetto will be seeking his third-straight finish of sixth or better on the Magic Mile in Loudon.

DiBenedetto finished fifth at New Hampshire in 2019 driving for his previous team then was sixth last year in the Motorcraft/Quick Lane Mustang. He said he feels good about his prospects in Sunday’s Foxwoods Resort Casino 301.

“New Hampshire is a place I always have circled off as being excited to go to,” he said. “I love the low downforce/high horsepower races the most. It fits my driving style for sure."

“Our cars have been strong there so I’m excited to see if we can go contend for the win.”

Sunday’s 301-lap race is relatively short compared to others on the Cup schedule, and that offers some opportunities for strategy calls that might not work in a longer event.

DiBenedetto added that he believes the No. 21 team, which is coming off top-10 finishes at Atlanta and Road America, has developed good chemistry between driver, crew chief and crew and is poised to lead laps and compete for race wins.

“We are in the best position we have ever been to go out there and feel like we can absolutely win.”

With no practice or qualifying this weekend, DiBenedetto is set to start 14th on Sunday, as starting positions were determined based on the teams’ performances in the most recent race, at Atlanta Motor Speedway where DiBenedetto finished ninth.

The Foxwoods Resort Casino 301 is set to start just after 3 p.m. Eastern Time with TV coverage on NBCSN. Stage breaks are scheduled for Laps 75 and 185.