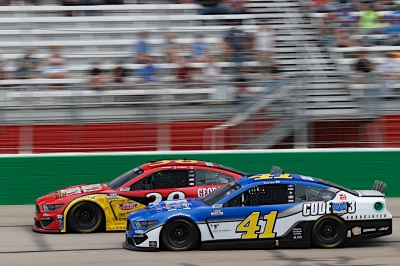 ● The Code 3 Associates Ford drifted back to 27th in the opening laps and held that relative position to the lap-25 competition caution. Custer reported his racecar was loose in the early going but then started “coming to me.” He pitted for four tires and a slight air-pressure adjustment and restarted 27th on lap 29. Custer had picked up four positions by the time the caution flag flew for a two-car incident on the backstretch on the ensuing lap. He stayed on track and restarted 22nd on lap 35.

● Custer cracked the top-20 by lap 37 and picked up another two spots by the end of the stage. He said his biggest issue was the opening laps of a restart and that his Code 3 Associates Ford improved over the long run. He pitted during the break for tires, fuel and additional air-pressure adjustments.

● The Code 3 Associates Ford driver held his relative position for the duration of the run to green-flag pit stops. Custer had worked his way into the lead on lap 122, but then he was called to pit lane for four tires, fuel and a track-bar adjustment, as he reported his racecar “restarted better this run” but didn’t have the advantage it had over the long run during the opening stage. He resumed 25th with several cars still needing to pit.

● Custer called the run to the end of the stage his best of the race to that point, but he said track position lost on the restarts was too difficult to make up, even with improved handling over the long run. He pitted during the break for four tires, fuel and additional track-bar adjustments. Before the final stage began, the race was red-flagged for 19 minutes for repairs to the track surface on the frontstretch.

● The Code 3 Associates Ford restarted “a little too tight this run,” Custer said, but he was able to stay in the top-20 and worked his way up to fourth during the next round of green-flag pit stops. He made his stop on lap 212, taking four tires, fuel and slight adjustments to enable his racecar to maintain its long-run speed. He resumed in 20th when the field completed the pit stop cycle.

● The race stayed green all the way to the checkered flag, during which time Custer picked up three positions for his second consecutive 17th-place finish.

●  Custer’s 17th-place result bettered his previous best finish at Atlanta – 18th, earned in the series’ prior visit to the track in March.

●  Kurt Busch won the Atlanta 400 to score his 33rd career NASCAR Cup Series victory, his first of the season and his series-leading fourth at Atlanta. His margin over second-place Kyle Busch was 1.237 seconds.

●  Denny Hamlin remains the championship leader after Atlanta with a 10-point advantage over second-place Kyle Larson.

Cole Custer, driver of the No. 41 Code 3 Associates Ford Mustang for Stewart-Haas Racing:

“Our Code 3 Associates Mustang was pretty solid on the long runs all day long. We just couldn’t fire off well on the restarts, and that loss of track position was just tough to make up, even with our long-run speed. Let’s go to the flat, mile oval at New Hampshire and see if we can get our best finish of the year.”