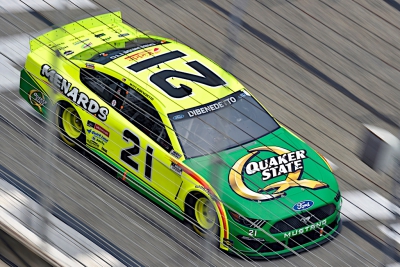 For the second week in a row, Matt DiBenedetto and the No. 21 Menards/Quaker State team experienced a Sunday of smooth sailing and came away with a ninth-place finish in Sunday’s Quaker State 400 at Atlanta Motor Speedway.

DiBenedetto started 12th, ran in the top 10 for most of the first Stage then closed the race with a surge to score his fifth top-10 of the 2021 season and second in a row, the first being a 10th-place at Road America the week before.

“It was another solid day,” DiBenedetto said. “We had a solid Menards/Quaker State Mustang for the start.

“It got a little tight, but [crew chief Jonathan] Hassler made some really good adjustments, going the right way every time, and at the end of the race we were right there.”

DiBenedetto said Sunday’s performance shows the potential of the No. 21 team in the weeks going forward.

“This is another good example of where we’re really clicking as a team and executing,” he said, adding that the over-the-wall crew had another great afternoon. “I think everybody just did a good job.

“You like those days when you don’t have anything too crazy to talk about other than our team just doing a good job. Our pit stops were good. We were solid all day there.”

DiBenedetto said he was glad to have a strong showing for his sponsors, from wearing a pair of green Quaker State socks pre-race to being among the top 10 at the checkered flag.

“It was important for us to have a really good run in the Menards/Quaker State Mustang, especially when it’s one of our sponsor’s name on the race,” he said. “I think we represented them well.”

Sunday’s race is the final one on the current surface at AMS, which is being reconfigured and repaved before the Cup Series returns next season.

DiBendetto said he’s going to miss the worn 24-year-old pavement, even if it did cause a red flag on Sunday while track officials patched up a spot where chunks of asphalt came loose.

“I made sure to appreciate it the whole time I was out there racing,” he said. “I have good memories, and I hate to see this place get paved.

Now DiBenedetto and the No. 21 team head to another of his favorites – New Hampshire Motor Speedway - for next Sunday’s Foxwoods Resort Casino 301.