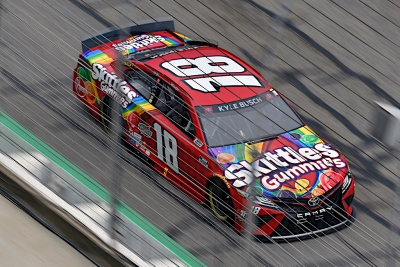 ● Busch started on the outside of row one and was able to get by polesitter Chase Elliott on lap 17.

● The Skittles Gummies driver was able to retain the lead for the rest of the 80-lap stage and grab the stage win.

● He brought the No. 18 to pit road on lap 83 to take on four tires, fuel and a small air pressure adjustment. His older brother, Kurt, was able to get off pit road first. Kyle Busch restarted second at the beginning of Stage 2.

● The two-time Cup Series champion found himself in third on lap 105, as he radioed to crew chief Ben Beshore that the racecar was worse in traffic on this run.

●The Skittles Gummies driver worked his way back up to second behind his brother to finish out the stage.

● The two-time Cup Series champion came to pit road on lap 163 to take on four tires, fuel and multiple adjustments to help free his car up and also not drag the splitter on restarts. He started second in the final stage.

● Busch settled back in the runner-up spot.

● The Skittles Gummies driver came to pit road for one final time on lap 163. The No. 18 team got him back out ahead of his brother in the No. 1 racecar.

● However, with 20 laps to go, Kurt Busch’s teammate Ross Chastain blocked the top side, which enabled Kurt to get up beside and then past the No. 18 of his younger brother, and he went on to win the race.

● This is Busch’s eighth top-five and 11th top-10 finish at Atlanta in 24 career starts.

“We just didn’t have enough front end with laps on tires. I had everything I had early in the run and then just smoked it behind the 42 (Ross Chastain), obviously. Just tried to fight hard after that when I got passed and had one valiant effort off of (turn) two, but didn't have enough momentum to drag him down and make him go high in (turns) three and four, and after that the tires were smoked. Great effort. Guys gave me a great piece. We were fast. The No. 1 (Kurt Busch) was definitely better than us today. I just thought I had him. And we did. But racing just didn’t play out that way for us. The Skittles Gummies Camry was fast, and thanks to Toyota, TRD, Rowdy Energy Drink, Interstate Batteries, all the guys. Good piece, just not quite good enough, just needed a tick more.”